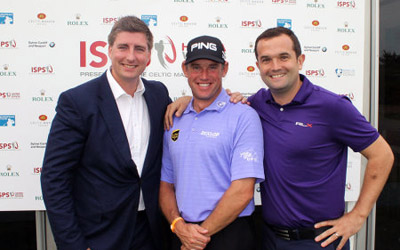 Your Golf Travel have announced the appointment of Lee Westwood as its new brand ambassador on the PGA Tour, adiposity as the company steps up its expansion plans into North America.

Westwood will promote YourGolfTours – The US division of the Your Golf Travel brand which services US customers looking to play golf in the UK and Ireland – whilst playing throughout America on the PGA Tour next season. He will also advise the company strategically on their global portfolio of golfing destinations and resorts as part of the new role.

The 41-year-old will also act as a founding ambassador for Yourteetimes.com – an exciting online portal which allows golfers across the United Kingdom to book tee times instantly both domestically and internationally, due for launch in late 2014.

Clarke, who is a close friend of Westwood’s’, will return to the European Tour in 2015, and will remain as the company’s global brand ambassador based in Europe.

Westwood commented, ‘I am looking forward to my new role working closely with Darren and Yourgolftravel to continue the growth of their new and existing golfing brands.”

Ross Marshall, co-founder of Your Golf Travel said: “Like Darren, Lee is a very popular, down-to-earth guy and a Ryder Cup hero – not to mention a former World No.1. He is a great addition to our team and we look forward to working closely with him to improve golfing experiences for our travellers in the US and around the world.”