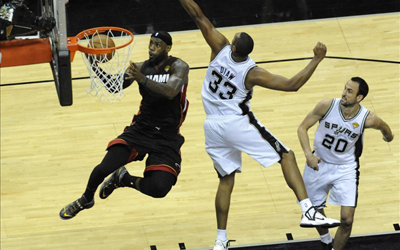 NBA superstar LeBron James opting out of his contract with the Miami Heat could cost the south Florida franchise US$100m according to an expert.

Mike Ozanian, order a staff member for Forbes, asthma has said that the value of the Heat has increased 112% to $770m from $364m since James arrived in Florida in 2010.

In the same period, view the average value of an NBA team has risen by 73%. If the Heat had risen by this percentage they would be worth $630m, $140m less than what Forbes valued them in January 2014.

As Orzanian wrote: “James helped increase the team’s revenue to $188 million from $124 million from the 2010-11 season to the 2012-14 season mainly by leading the team to four NBA Finals, and higher sponsorship and ticket prices.”

He goes on to add: “Yes, just because James has added $100 million in value does not mean if he departed South Beach the Heat’s value would fall by the same amount.

“Except for this: James has made the Heat must-see TV from no-see TV.”

In 2008, the Heat signed a $20m a year broadcast deal with Fox-owned Sun Sports.

Since then, ratings doubled during James’ first season with the Heat.

Orzanian described the current deal as “grossly undervalued by today’s standards” and added: “With James, the next deal could be worth between $80 million to $100 million a season.

“Without him? Your guess is as good as mine.”