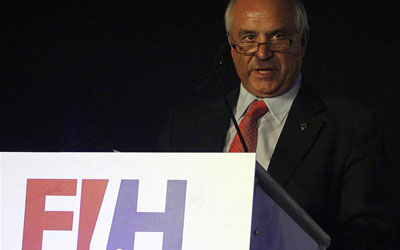 FIH President Leandro Negre has retained his position for a further four years after the the 43rd FIH Congress re-elected the Spaniard after running unopposed for the role.

The congress also elected a new Executive Board in place for the next term. In total five Executive Board members were elected to hockey’s governing body with four being newcomers. In addition to the Executive Board election, FIH President Leandro Negre was reconfirmed for another four-year term by the Congress after running unopposed for the position.

“I thank all of the countries and delegates for putting their faith in me for another term.” Negre said. “We have accomplished a lot in the last four years, but there is still work to be done and many new exciting projects to tackle.”

All three of the women elected today are new to the Executive Board. Mary Cicinelli (CAN), Sue Catton (ENG) and Sandra Isola (ARG) were all elected in the first round of voting. As the third-place vote getter, Isola will serve a two-year term instead of the standard four-year term to satisfy the FIH Statutes at the next Congress. The trio replace Anne Ellis (WAL) and Sue Neill (CAN), who are retiring from the Board in addition to Renita Gerard (AUS) who was not re-elected.

Following the voting for the female board members, there were two remaining places to be determined. After one round of voting, those final two places went to standing Executive Board member Jan Albers (NED) and HRH Prince Abdullah Shah. Stephan Abel (GER) will not return to the Board next term