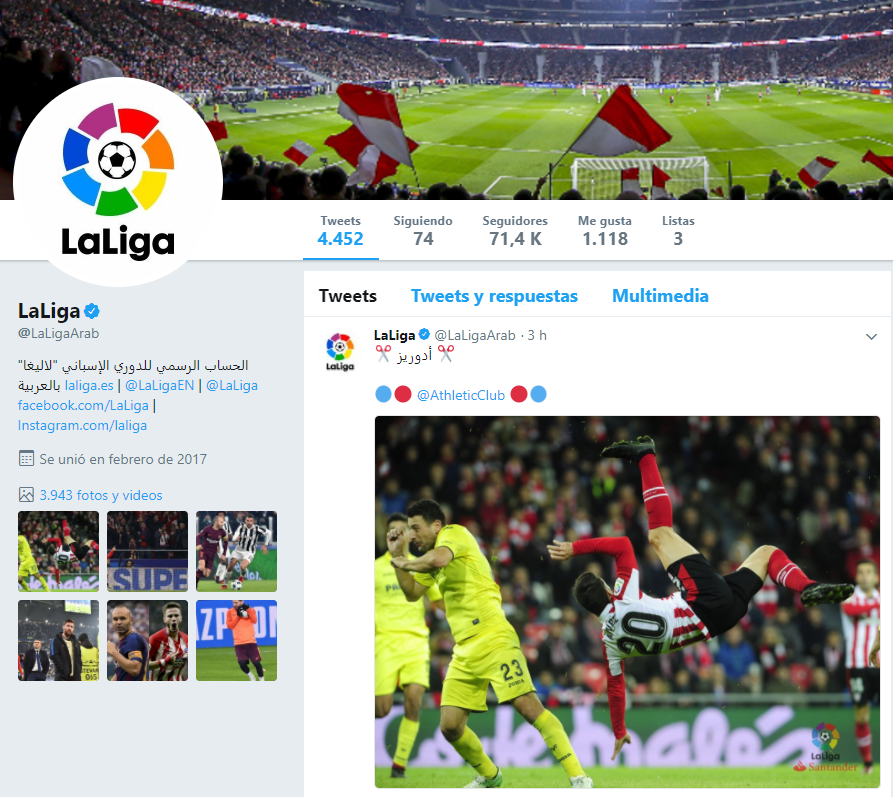 LaLiga has managed to surpass 4,735,000 Facebook followers in Arab countries. The Spanish competition, which is currently fully immersed in a brand internationalisation programme, has been publishing geolocalised content across Arabic-speaking countries on its official Facebook page on a daily basis since the beginning of this year.

With the aim of bringing LaLiga closer to fans in Arab countries, LaLiga uses Facebook and Twitter to publish information about the competition and its past and present Arab players, plus interviews and statistics, as well as offering congratulations during the main festivals and celebrations.

The countries in the Arab world where the Spanish competition enjoys the strongest following on Facebook are Egypt, Algeria, Morocco, Tunisia, Jordan and Saudi Arabia, and it manages to reach a total of 22 Arab countries through its posts.

The digital growth experienced by LaLiga across the Arab world is a reflection of the global expansion which has occurred in all of LaLiga’s digital channels in recent months. By publishing content in more than ten different languages, including English and Chinese, LaLiga has amassed a community of over 40 million followers on all of its social media channels. Furthermore, LaLiga has its own YouTube channel.

The provision of content on social media to followers in the Arab world augments other actions taken by LaLiga in Arab countries, including opening an office in Dubai four years ago headed by Fernando Sanz. This office led the way by opening the first LaLiga High Performance Centre in the world in 2016 and has also managed to make the United Arab Emirates the location for the implementation of LaLiga’s first academy this year.

2017 has been a key year for the internationalisation of the Spanish competition, which now has representatives in the UAE, Egypt, Saudi Arabia, and Morocco working on different projects extending as far as Mauritania, Algeria and Tunisia.

LaLiga, whose international presence is practically unrivalled among other domestic competitions, is watched in 182 countries via its 90 international broadcasters. In addition to UAE, it has offices in the United States, Nigeria, South Africa, China, India, Singapore and Belgium, and it has 44 international representatives selected through the LaLiga Global Network programme distributed across other strategic countries.