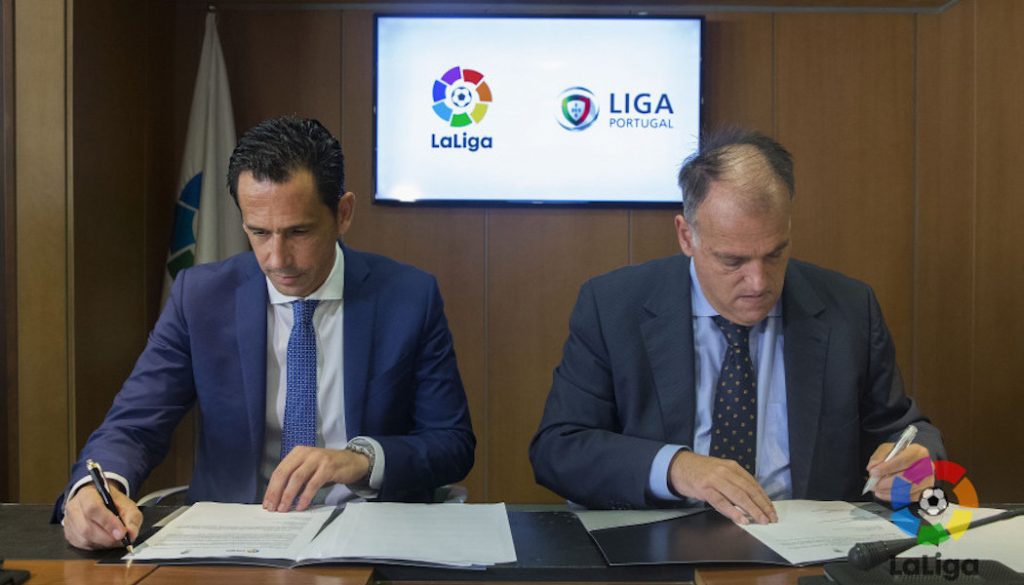 LaLiga and Liga Portugal have signed a Memorandum of Understanding (MoU), which will see the two organisations together to develop both brands in Spain and Portugal.

The agreement will enable the two institutions to share information on finances, institutional issues and training.

LaLiga representatives will assist their Portuguese counterparts in an effort to see the league establish a financial control programme, the aim of which is to guarantee financial transparency across the Portuguese game and in the running of its clubs.

This is an initiative that has been overseen by LaLiga since Javier Tebas’s inception as president in 2013.

In addition, Tebas and Pedro Proença, president of Liga Portugal, plan to join forces and promote both brands and their internationalisation, with a view to fostering their development and growth.

Another of the standout features of this partnership is the commitment of both institutions to promote fair play and lead the battle against match-fixing. The two bodies will work together to eradicate such practices by developing joint policies focused on integrity-related aspects of the game.

On an institutional level, LaLiga is set to advise the Portuguese league about the creation of a foundation and the development of social outreach projects by drawing up a corporate social responsibility policy.

Liga Portugal also expressed an interest in the efforts of Spanish football’s governing body to promote youth football, with the LaLiga Promises tournament attracting much attention.

For this reason, the agreement includes the possibility of opening LaLiga Excellence Academies in Portugal and the staging of children’s summer sports camps.