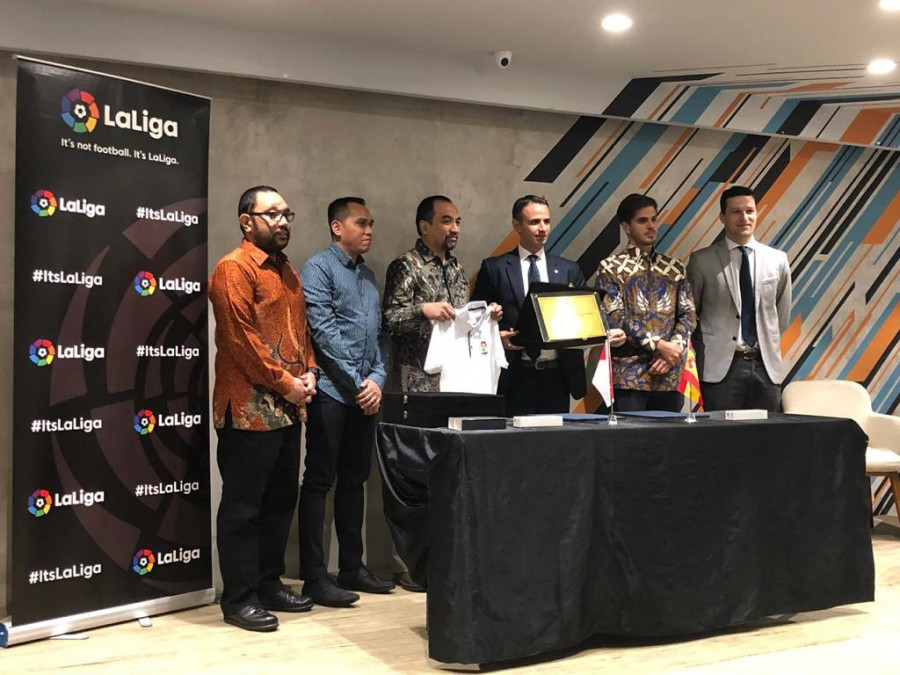 LaLiga has made new agreements with the Chinese Super League (CSL) and PT Liga Indonesia Baru, furthering its commitment to developing the sport of football in Asia and across the world and sharing knowledge that will help all leagues grow.

The agreements were finalised in the past month and will see the leagues collaborate on a range of projects from youth development to financial management and technology. This extends the many years of partnership that LaLiga has held in the Asian countries where the popularity of football continues to explode.

LaLiga President Javier Tebas met with Dang Zheng, General Manager of CSL (see photo above), in Madrid to finalise the agreement with the Chinese competition. As part of the project, LaLiga will implement training programmes in China for both academy players and coaches, along with organising and promoting youth tournaments and friendly fixtures between top flight teams in both nations.

Commenting on the agreement, Zheng said: “We are convinced that the close relationship with LaLiga will benefit Chinese football from youth level right up to the professional game. It will help to create a stable framework for collaborations between the two organisations which will allow us to successfully carry out projects together.”

The agreement with PT Liga Indonesia Baru was signed in Jakarta in mid-January 2019 by Ivan Codina, LaLiga’s Managing Director for South East Asia, Japan, Korea and Australasia, and Risha Adi Widjaya, CEO PT Liga Indonesia Baru (see photo below). Financial management is one of the biggest aspects of this deal, with both sides sharing their best practices for ensuring economic transparency in the Indonesian game.

The leagues will also work together to promote both Spanish and Indonesian football in new markets. Experts from both countries will speak at conferences in which they share their knowledge on various aspects of the game from marketing, administration, stadium security, fighting match-fixing and brand internationalisation.

In both agreements, the use of technology has been cited as an important development point. In China, there is an agreement to share guides for implementing new technology across all aspects of the game while in Indonesia, LaLiga will advise on how technology can be used to help referees to make the best possible decisions.

Off the pitch, LaLiga will also be sharing best practice from its Foundation. It will advise PT Liga Indonesia Baru on the best way to create their own and develop various social outreach projects. The agreement with CSL also covers social responsibility of clubs in their community, the women’s game and marketing of these efforts.

Maintaining strong communications and relations with global leagues is central to LaLiga’s strategy for growing football around the world. Its relationship with PT Liga Indonesia Baru dates back to 2013, while representatives from CSL recently visited Madrid to take part in different workshops with a variety of LaLiga departments, giving them a stronger understanding of how Spanish football is run behind the scenes.

LaLiga’s opportunities for further growth in China were recently boosted by the arrival of Wu Lei to RCD Espanyol de Barcelona, which has given Chinese fans a powerful new reason to discover Spanish football.