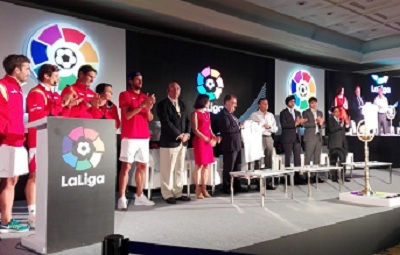 La Liga have entered the Indian market with their newly opened office in New Delhi.

This office is the La Liga’s third in Asia, with the other two being in Beijing and Dubai.

Javier Tebas, President of La Liga said: “It means a lot; this is one of the most important days in LaLiga’s history. Being present in India is very important to us. We have been working hard towards this for a while and have even made changes to kick-off times with Indian fans in mind. I want to highlight the efforts of Sony, our broadcaster in this country.

“We’ve got to grow together if we are to become the best. I hope that our new office will enable us to achieve our dreams.”

“Many of my friends have played in India and I am really happy to be here. Football has been a huge part of my life and it has brought a lot of joy. I hope to motivate a lot of Indian players and see them do well in the years to come,” said Morientes.

He highlighted the La Liga’s plans to open more offices and academies in the country to promote football in India. Additionally, Tebas noted how La Liga have change kickoff times to suit Indian audiences and that they are planning for top Spanish clubs to play in India to promote the league and the game.