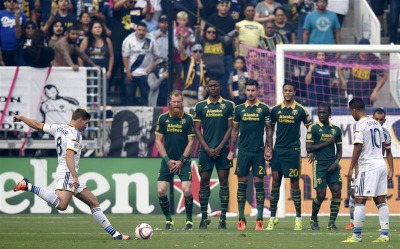 The LA Galaxy have partnered with VR company Laduma in a new multi-year content and marketing agreement making Laduma an official partner of the five-time MLS Cup Champions.

The partnership, developed by AEG Global Partnerships, is designed to introduce fans to a new, multisensory way of following and experiencing the club.

Through the series, fans will be invited into the LA Galaxy locker room on match day, spend time with Gerrard at his home and see where Keane likes to hang out in Los Angeles.

The VR series will debut at two LA Galaxy home games in the 2016 MLS season with Laduma and the LA Galaxy inviting fans to watch the VR content in select areas of StubHub Center.

Fans will be able to put on a headset and have first-hand access to never-before-seen content, including specially produced videos and teasers featuring exclusive footage of players as well as other behind-the-scenes stadium and team experiences.

Laduma Chief Executive Officer Ben Smith said: “At Laduma, we pride ourselves on working with the most iconic brands in the world. The LA Galaxy are not only synonymous with style and success within MLS, but they are also widely respected for being one of sport’s most forward-thinking, digitally savvy organizations.And so our partnership is about creating incredible content for one of the most digitally engaged audiences in professional sports.”