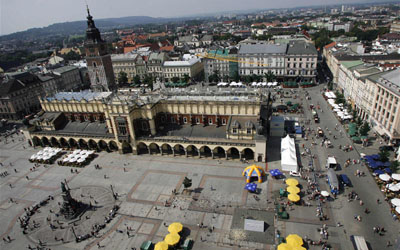 Krakow have withdrawn their bid for the 2022 Winter Olympics after a referendum over the weekend revealed a majority of the Polish city’s residents voted against making a bid for the Games.

The proposal, which included plans to hold some events in neighbouring Slovakia, was rejected by more than two thirds of those who voted on Sunday, leaving bid officials with little option other than to throw in the towel.

Almost 70 percent of voters were against the plan that was seen as potentially bringing the region of Lesser Poland more than 20 billion zlotys ($6.6 billion) in infrastructural investments, including a long-awaited transport link with Zakopane, the capital city of the Polish Tatra mountains.

“The referendum is binding and valid for the authorities of Krakow because the turnout exceeded the required 30 percent of voters,” referendum official Jakub Michaluk told a news conference.

With Krakow out of the picture Ukraine’s Lviv, China’s Beijing, Norway’s Oslo and Kazakhstan’s Almaty are the last remaining cities in contention for the hosting rights.

Lviv’s hopes have been severely dented by the ongoing political crisis in the country, meaning next year’s election of the host city has been virtually whittled down to just three candidates even before a shortlist is drawn up in two months.

The International Olympic Committee (IOC) will select the winning city in July 2015 but with Oslo also facing strong public and political opposition, it could become a straight race between Beijing and Almaty.

The 2018 Winter Olympics are being held in Pyeongchang, South Korea.