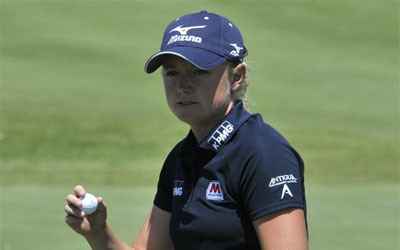 KPMG LLP, the audit, tax and advisory firm, today announced that it has elevated its sponsorship agreement with Stacy Lewis, LPGA Tour five-time champ, and reigning Rolex Player of the Year.

As part of the renewed relationship with KPMG, Lewis’ hat will feature the KPMG logo which had previously been positioned on her golf shirt. This relationship is part of KPMG’s golf sponsorship platform, which began when the firm launched their global sponsorship agreement with PGA Tour star Phil Mickelson in 2008.

As part of the new agreement with KPMG, Lewis — who is ranked No. 1 among U.S. women golfers and No. 3 in the world — will wear the KPMG logo on her hat on the LPGA Tour, beginning this week at the ISPS Handa Women’s Australian Open in Melbourne, Australia.

“Last year we were thrilled to have the opportunity to sponsor Stacy, a rising star on the LPGA Tour,” said John Veihmeyer, Chairman and CEO of KPMG LLP. “Aside from being a tremendous golf champion, we have been so impressed with her character, determination, and professionalism, and that’s why we wanted to deepen our relationship with her. Stacy’s support for her community embodies the spirit of KPMG, and we look forward to involving her in more of our philanthropic efforts.”

Veihmeyer added, “At KPMG, we value diversity and the perspectives that women bring to our organization. Our relationship with Stacy reinforces KPMG’s commitment to the increasingly important role that women play in our firm and in the business community.”

Stacy Lewis added: “I’m really proud of my relationship with KPMG and am excited to take it to the next level. I’ve experienced first-hand their culture of professionalism and integrity, focus on being the best, and commitment to the community and diversity. They are also great fans of golf and I look forward to continuing to build strong and meaningful relationships with KPMG’s partners, employees, and clients.”