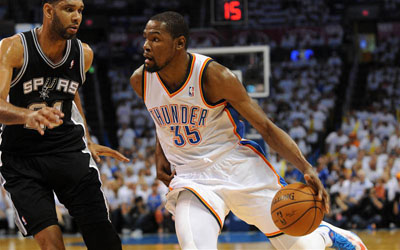 Neff founder Shaun Neff told The Associated Press that the company will launch the Thunder star’s signature underwear collection in time for next year’s back-to-school crowd.

Neff, which has continued to expand beyond snow and skate headwear, does not currently have an underwear line. Neff said he had been looking to move into that market, and when he got together with Durant and his Roc Nation representatives to discuss the possibility, both sides were on the same page. Neff said the idea of a partnership started during while he was on a flight with Roc Nation co-founder Jay Brown.

”We just thought that this was a category that was literally overlooked,” Neff said. ”No one’s really put a stylized element to it. What we’re working on is, `How can we brand this, put some style and flavor and fashion in the underwear game while being comfortable?”’

Durant will be a brand ambassador, help design the products and have equity in Neff’s underwear division.

”It’s consistent with the type of partnerships and platforms we’re trying to create with KD now,” Yormark said. ”It’s not just a traditional transaction, but it goes much deeper than that as it relates to a full collaboration between the parties.”

Neff said Durant’s success and style made him a perfect fit to add to his company’s mainstream sports appeal.

”The marriage of our brand, being so tied into youth culture, and millions and millions of fans across the world, and then team that up with KD’s fan base – I think a lot of junior high and high school kids are going to be running to the shops to get these things,” Neff said.

Durant and Roc Nation have been rolling since he won the MVP award. Durant has re-signed with Nike, Sprint and BBVA Compass, added deals with Sparkling Ice, Orange Leaf and Neff, was named the cover athlete for NBA 2K15. He already had deals with Panini, KIND Healthy Snacks and Skullcandy