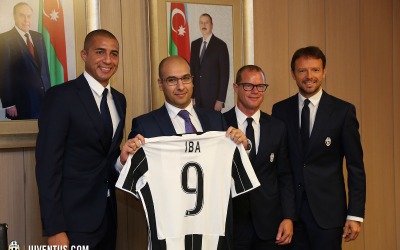 Juventus have announced a new Regional Partnership with International Bank of Azerbaijan during a press conference held in the country’s capital city, cheap Baku.

As Official Regional Partner, IBA will be able to promote its own products and services using Juventus’ logo as well as images of Bianconeri players in any activities and forms of communication within Azerbaijan.

“This is the fifth regional partnership we have signed in the last 16 months, confirming Juventus’ continual growth on an international level,” declared Ricci.

“We are proud to be working in a country of great potential such as Azerbaijan and to collaborate with an organisation as prestigious as the International Bank of Azerbaijan.”

Echoing Ricci’s enthusiasm for the project, Mansurov said: “We’re delighted to announce this very important partnership with the most successful club in Italy which both complements and strengthens the work that we are doing for young people in Azerbaijan and which will allow us to teach them the core values that Juventus displays on the pitch every day around the world.”