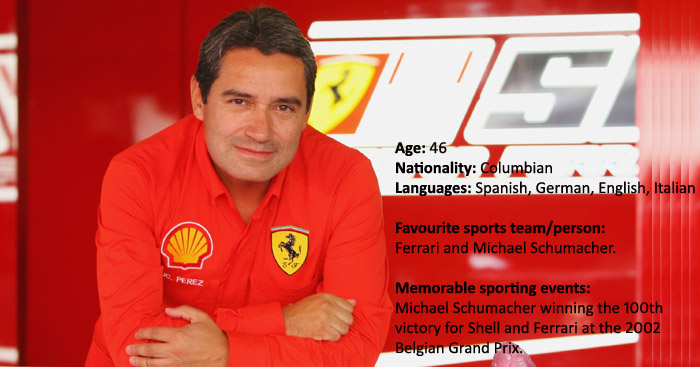 Juan Carlos Perez is Global Account Manager at Shell, and has worked for the company for 23 years since graduating in Columbia. He has worked all over the world, including the Caribbean and London, and is now based in Switzerland.

How did you first come to work for Shell?
I am a veteran at Shell, starting 23 years ago back home in Columbia. I was originally hired as a graduate by Shell when I had a background in chemical engineering. My first role at the company was as sponsorship manager in the local organisation and then I moved on to commercial marketing and sales of Shell in Columbia until 1999  when I moved for an international career.

I have been situated in the Caribbean, North America, London and finally Switzerland, where I have now been for six years.

What would you say it is about Shell as a company that has made you want to work for them for over 20 years?
I think it is the opportunity to develop an international career. Basically working for Shell has been like working for five or six different companies. The size of the company and the different lines of business give you the opportunity to take on different challenges and let you learn continuously. This is the one of the main reasons why I have chosen to stick around for so long.

Could you pick out some career highlights to date?
I think the main one is the way I changed the organisation in the sponsorship arena. When I came to the global sponsorship team in 2002 the first thing I did was to assess how many sponsors we had on a global level, which was a real eye-opener because at the time the company was engaged in over 200 sponsorship activities and we even owned a basketball team in Thailand.

We also did cricket in the Caribbean, cycling in France, hockey in the Netherlands, you name it. We were involved in almost every single sport, either at a local level or a regional level.

And so I created a sponsorship strategy and a sponsorship policy to concentrate all those resources we were using on to a few specific sponsorships that were either brand led, like Ferrari and Ducati, or commercially led, like we did in the past with Skoda.

How do you think the sponsorship market has changed in recent years?
Since I joined the global sponsorship team in 2002, the main change I have seen is that it has moved to a more business-to-business industry.

The days where sponsorship was simply about bringing large amounts of brand awareness or brand exposure are now gone.

Indeed, for companies like Shell, we already have a big level of exposure; therefore we don’t sponsor activities just to expand our brand awareness. We don’t really need to as the logo and the brand is already globally recognised. We are looking now, and I guess this is standard practice in the sponsorship industry, for ways in which you can derive business-to-business benefits with corporations, and that is a big change in the way we select sponsors, the way we activate and the way we measure returns.

Activation is obviously a key part of sponsorship now. What are your thoughts on this and what does Shell do specifically in this field?
We have a rule of thumb which is a bit of an internal practice here at Shell, whereby we allocate at least three times as much money in activation as we do in sponsorship fee rights. And again, going back to those 200 global sponsorships, in many of those cases, the resources were only to pay for the rights and then we had no money left for activation.

So I reviewed the number of activities and applied this rule of thumb to make sure that the sponsorship is really made aware to the consumer.

At Shell how do you select what to sponsor? With the Olympics for example, when there’s no obvious motorsport link. Is it mainly about building the brand?
Well basically we created a framework to select sponsorship and this is based on two objectives. One is brand building sponsorship, and a prime example here is with Ferrari. The second objective is business-to-business and commercially driven sponsorship.

Regarding Shell’s involvement with the Olympics, we were more of a technical supplier, and not really at the level of corporate partner, because, as you mentioned before, it is outside our core business areas like energy and mobility, and here motorsport is the obvious link.

Going forward, I can imagine that as sponsorships evolve, there could be wider opportunities for commercially driven sponsorship that branches out of the motorsport arena, but for the time being our main focus is motorsport.