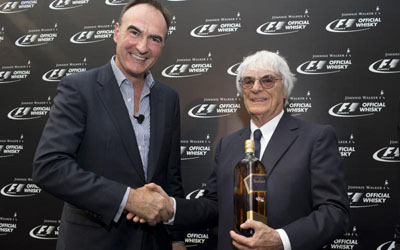 The announcement of the new multi-year arrangement, buy cialis which sees Johnnie Walker become the Official Whisky of Formula 1, was made today at an event at the Conrad Centennial Hotel in Singapore by Nick Blazquez, President of Diageo in Africa and Asia, ahead of this weekend’s 2014 Formula 1 Singapore Airlines Singapore Grand Prix at the Marina Bay street circuit.

The new partnership greatly strengthens the historical connections that the Walker family has with the world of motorsport and Grand Prix racing which go back to the 1950s. Building on those historic links, in 2005 Johnnie Walker established a partnership with McLaren Mercedes which, over the past nine years, has enabled the brand to deliver successful marketing and responsible drinking programmes around the world.

Speaking at the announcement today, Nick Blazquez said: “Becoming the Official Whisky of Formula 1 will enable Johnnie Walker to greatly extend its reach to race fans. As a result of our new arrangement, we will have access to a global television audience of more than 450 million people and a track attendance audience of around 1.5 million every year.

“Equally important, and a key reason for Johnnie Walker to become the Official Whisky of Formula 1, is the huge opportunity we have through this expanded global platform to reach even more F1 fans around the world with responsible drinking messages.”

Bernie Ecclestone, Chief Executive Officer of the Formula One group, commented: “This is an exciting sponsorship for Formula 1. I have admired the way that Johnnie Walker has entered into their sponsorship of Formula 1 to not only achieve commercial benefits but to also highlight the importance of responsible drinking. It is a great example of how an alcohol brand can dedicate time and money to be a force for good.”