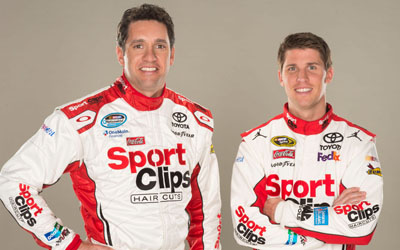 Joe Gibbs Racing (JGR) have announced the renewal of Sport Clips Haircuts as the primary sponsor for a total of nine races during the 2013 NASCAR season – the most in the Texas-based hair care franchise’s five-year history with JGR.

“We have a strong partner and true brand-ambassador in Joe Gibbs Racing,” said Gordon Logan , Sport Clips Founder and CEO. “Through the years, it has been exciting to see racing fans become our clients, and our clients become racing fans, through this partnership and love of the sport.”

In his first year with Joe Gibbs Racing, NASCAR veteran Elliott Sadler brings with him 197 career Nationwide Series starts, including nine wins, 46 top-five and 86 top-10 finishes. Sadler will race for Sport Clips in seven Nationwide Series Races, including the VFW Sport Clips Help a Hero 200 at Darlington Raceway on May 10th. “We’ll have a lot of talent behind the wheel with Denny and Elliott! We’re looking forward to an exciting season,” said Logan.

“We’re excited to have Sport Clips continue its partnership with us at JGR,” said J.D. Gibbs , President of Joe Gibbs Racing. “It’s been fun to watch the success of their program and how it continues to grow each season which now includes the Sprint Cup Series with Denny (Hamlin) as well as our Nationwide Series program with Elliott (Sadler) .”