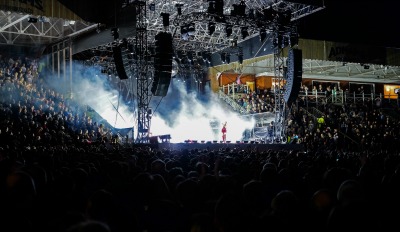 Nicky Dunn, who has nearly 30 years’ experience in the live music industry will head the board of Jockey Club Live and assumes her new role with immediate effect.

Dunn, who has just been awarded an OBE in the Queen’s Birthday Honours, was Commercial Director of the London Docklands Arena before becoming CEO of the Odyssey (now SSE) Arena in Belfast, a role she held for 10 years.

She also holds non-executive positions with a number of high profile organisations including The London Legacy Development Corporation and  E20  LLP  (Olympic Stadium). She also Chairs the board of  The Titanic Foundation, which owns the highly successful Titanic visitor attraction in Belfast as well as  Netball World Cup (2019).

Nicky Dunn said: “In the relatively short time since Jockey Club Live launched in 2013 they have established themselves as significant players in the live music market.”

“The combined teams of Music+Sport and The Jockey Club are a formidable partnership and I am looking forward to helping them realise their ambitious vision and to build on their existing success.”

Paul Fisher, Group Managing Director of Jockey Club Racecourses, said: “Jockey Club Live has now reached a stage of its development where we have been able to attract someone of Nicky’s calibre to join us as Chairman. We are hugely excited about the potential of Jockey Club Live and I am looking forward to working with Nicky to help us fulfil our ambitions.”