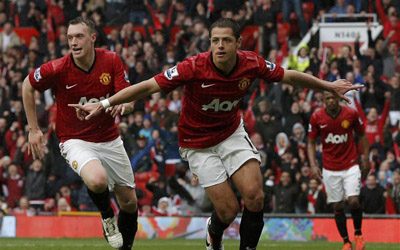 Electronic Arts Inc. subsidiary EA SPORTS has signed one of Mexico’s most popular and accomplished footballers, Javier ‘Chicharito’ Hernandez, to a multi-year endorsement contract that will see him make his debut on the cover of FIFA 14 in Mexico, and on one of two covers in the United States.

Chicharito will appear wearing the Mexican national team home kit alongside the world’s top footballer, Barcelona and Argentina superstar Lionel Messi. Fans in the United States will also have the option to choose the global cover featuring an iconic image of the world’s No. 1 player, Messi.

“We have long admired the flair and passion Chicharito brings to the sport,” said David Rutter, Executive Producer of FIFA 14. “With Hernandez on our team we have Mexico’s best and most exciting player to help EA SPORTS make a deeper connection with our fans.”

“For me it’s a real honor to have been selected to appear on the cover of FIFA 14, first of all because I declare myself a big fan of this game, and second because I’m looking forward to sharing my passion for football and EA SPORTS FIFA 14 with fans all over the world,” said Hernandez.

The multi-faceted partnership will see the Manchester United Striker become an EA SPORTS Football Ambassador. He will become the cornerstone of marketing and advertising campaigns in Mexico and North America, featured on packaging and utilized in social media activities. Chicharito will appear on the cover of FIFA 14 on the Xbox 360 games and entertainment system with Kinect from Microsoft, and the PlayStation3 computer entertainment system with PlayStation Move support.