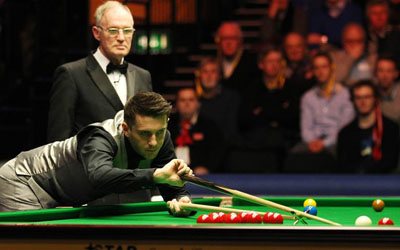 The showpiece event will run from November 19 to 24 at the Ricoh Arena in Coventry and will bring together many of the best snooker players on the planet. ITV4 will provide extensive live coverage.

Promoted by Matchroom Sport, it will also be televised live on CCTV in China and syndicated globally. There will be a top prize of £100,000 on offer and current champions of snooker’s major tournaments, including the likes of Ronnie O’Sullivan, Judd Trump, Mark Selby, Neil Robertson and Ding Junhui, will be eligible to compete.

Snooker returned to the ITV network for the first time in 20 years earlier in 2013 with coverage of the Haikou World Open.

World Snooker Chairman Barry Hearn said: “We are thrilled to welcome back ITV4 to televise the Champion of Champions. Their coverage of the Haikou World Open was a real success and I’m delighted that ITV have reaffirmed their interest in snooker.

“There is massive support for snooker in the UK so it’s great news for the fans that they can watch this fantastic new tournament on free-to-air broadcast.

“I’m excited about this event because it will bring together the elite of the sport. Coventry has a huge catchment area so I’m expecting packed houses and a tremendous atmosphere.”