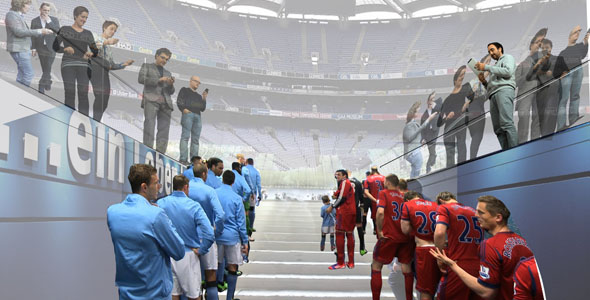 The importance of premium hospitality in new stadia cannot be overestimated. Two thirds of Wembley Stadium’s revenue is generated by its premium Club Wembley seats, despite the fact they account for less than one fifth of the total capacity.

The quality of hospitality across all new sports venues has risen considerably, in line with the expectations of spectators who are no longer satisfied with a simple pie stand or hotdog cart.

Nicholas Reynolds and Chris Lee, Senior Principals in the Populous London Office, recently hosted an event in association with iSportconnect, aiming to replicate the way in which we involve our clients in the design process, with a particular focus on hospitality.

Here, Nicholas describes what turned out to be a fruitful exercise.

Customer experience and hospitality within stadia and arenas is a constantly evolving facet of the buildings we design.

In a saturated market of venues of all shapes and sizes, innovation and uniqueness is key, and when a scheme can take up to five years to transition from the drawing board to opening, there is an inherent risk of a concept becoming dated before it is built.

The only solution to this challenge is to involve clients as early as possible because they see first-hand, week-in, week-out, how their own customers’ habits are changing. Little observations, when accumulated, can lead to big innovations.

We understand that a fantastic idea can come from anywhere. Our expertise as architects allows us to turn those fantastic ideas into reality – to bring what might seem far-out within touching distance.

On 7th October we held our first Stadium Masterclass with iSportconnect at Emirates Stadium in London.

Overall, we found it to be an incredibly valuable experience because, on this occasion, we had input from six different clients, when usually we would have input from one. The focus of the Masterclass was on emerging trends in the hospitality sector.

The Masterclass was conducted in the format of a design workshop, with teams of architects and designers working alongside our guests, brainstorming ideas, identifying those areas that could be developed to provide fans with the ultimate match day experience, while simultaneously expanding the reach of a venue’s influence and interaction with supporters.

The diversity of our guests’ backgrounds produced some interesting insights. For example, Felicity Black-Roberts, our only guest based purely in hospitality, highlighted the positive correlation between height and value within the hotel industry.

In stadium hospitality the view of the playing field itself is becoming less important – much more of a factor is the uniqueness of the experience offered, so we see developments like event-level bunker suites, which don’t necessarily give the best view of the match but instead benefit from the atmosphere of being as close as possible to the on-field action.

Conversely, sky bars raised high above the stands might not have the advantage of proximity but they also offer an experience that is undeniably singular, for which spectators are willing to pay a premium.

Alistair Spiers was concerned with the unique requirements of Paris Saint-Germain, being the sole major football team in a city as large as Paris.

Their strong international fanbase – they have more Facebook ‘likes’ in Brazil than they do in France – has led them to explore ways they can interact with overseas fans and extend the PSG brand outside of the home ground. Innovations like a fully interactive virtual stadium have been the result.