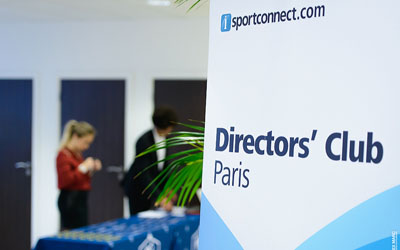 iSportconnect, the world’s largest private network for sport business executives, held a successful Directors’ Club in Paris on Friday, at the French Football Federation Headquarters, in the heart of the French capital.

It was the second edition in Paris after the event took place at PSG’s Parc des Princes on 12th December 2013. The event featured a panel discussion with senior figures in the sports industry in France with a Question Time style debate and was followed by a networking session.

The event was moderated by the well-known French TF1 Journalist Frederic Calenge.

Together, they discussed the latest developments and trends in the sports business world and the challenges facing the industry, such as broadcasting rights, emerging sports, second screen experience etc.

After the debate, Arnaud Simon, Managing Director of Eurosport France, said: “It was great to gather and discuss freely about the hottest topic in the industry.

“Being able to speak with professionals, sharing the same issues, in order to think on how to improve is simply fantastic.”

Speaking after the event, Sree Varma, Founder and CEO of iSportconnect, commented: “We are extremely pleased with our second Directors Club in Paris, after our successful debut here last year.

“I would like to thank all of the panellists and delegates for joining us and making this event as successful as the first. We are now looking forward to hosting another successful Directors’ Club in the Middle East later this year as we continue the growth of this event globally.”

Video highlights for the second Directors’ Club in Paris available below: