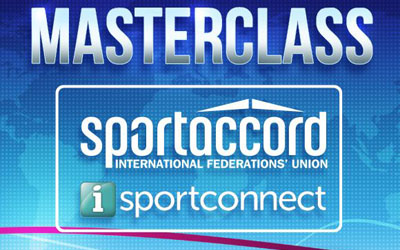 The iSportconnect Digital Media and Technology Masterclass in association with Sportaccord once again proved to be hugely successful, with around 50 delegates debating best practice.

The second installment of the Masterclass was held in Lausanne at the iconic Maison du Sport International (MSI) building, home to many leading sports federations.

The event was staged in two parts with the Digital session taking place in the morning and the Technology session in the afternoon.

Gareth and Alex (pictured below) gave their opinions on big events and the changing nature of sporting and entertainment experiences, mobile technologies, real-time communications and the value of social media.

Speaking about the event, Alex Stone said: “It was very informative and very enjoyable. It’s a great opportunity to talk about what FIFA does, and listen to what others are doing.

“You really learn from people in the same fields. We still have a lot to achieve and by mixing with different people from different sports we can learn a lot just like today.”

Gareth shared Alex’s view, adding: “I really enjoyed it, people were coming from all over the world, it was good to hear the different perspectives and how we all try to be innovative.”

Sanjeev Katwa (pictured above), former IT Director at City Football Group, moderated the Technology panel which was the second session of the day, featuring Daniel Marion, Head of ICT at UEFA, Roberto Garcia Riopedre, Head of Sales and Marketing at Atos MEV and Guy Horne, General Director of IEC in Sports.

Daniel, Roberto and Guy (pictured below) discussed fan experiences, connected stadiums and venues and what new technologies they see emerging in the coming years.

Roberto Garcia delivered a great presentation introducing Atos Major Events and how they impact the sport industry through business technology services, such as connected stadiums and digital fan engagement.

He introduced the delegates to the Atos SMART player (Sports Media Application in Real Time) which allows fans to stream any Olympic competition with real-time graphics.

Giving his thoughts on the event as a whole, Roberto (pictured above) said: “It was amazing; I enjoyed it very much, in the morning with the more technical debate and in the afternoon with my colleagues. We can never stop speaking about all this and we really need to develop this, for the fans.”

UEFA’s Daniel Marion said: “It was good to be in Lausanne surrounded by all our colleagues from the sports federations and clubs. The whole crowd was asking questions, everyone was participating, it was fantastic.”

Guy Horne (pictured above) was impressed with the quality of the speakers at the Masterclass. He said: “The conference was really good, really thought-provoking. We had two of the leading exponents, with both O2 and FIFA, how humble and modest and sensible their opinions were, it was really worth listening to.”

iSportconnect would like to thank all of our panellists, delegates and partners for another fantastic Masterclass session. Video highlights will be available through iSportconnect TV soon. We look forward to seeing you all for the iSportconnect Stadia Masterclass in association with Populous.

Networking session in full flow at the Masterclass

Delegates in the MSI building for the Masterclass

The exclusive, invitation only Masterclass series, is a unique gathering giving sports technology executives the chance to learn from other top level executives, hear industry insight based, join in on group debates, network in a relaxed environment and book one on one meetings with our top quality panellists.

iSportconnect will have three Digital Media and Technology Masterclass events in 2015, to be held in London, Lausanne and New York. Dates will be announced at the end of the year.