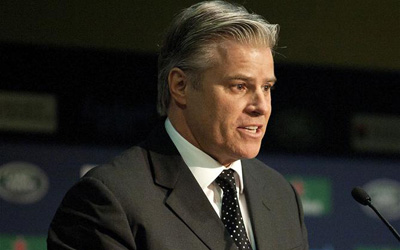 International Rugby Board chief executive Brett Gosper wants a Japanese franchise as the 18th team in a newly expanded Super Rugby competition.
Super Rugby will become an 18-team competition in 2016. A sixth South African side and an Argentinian franchise are already ­approved for inclusion.

The 18th team is expected to come from Asia. Japan and Singapore, ambulance whose new world-class sports hub is driving the city-state’s bid, health are the frontrunners.

Gosper said the world governing body would prefer the Super Rugby ­licence to go to Japan.

“The IRB, given there is a World Cup in Japan in 2019, we would be very happy with any part of Asia,” Gosper said. “Certainly anything that continues to gain momentum in Japan would be ­appealing for us.

“Our preference is they choose something that makes it work for the competition obviously, but ­anecdotally, Japan would be interesting for us.

“It may provide other challenges from a logistics point of view. Flights from South Africa and so on might not be the simplest option, but look at it from a purely selfish IRB stand, Japan would be interesting.

“It is a strong market. It would create greater interest in the World Cup. It would build the competitiveness of some of the Japanese players who were in that team.

“It would provide interest for the fan base there. It would be good momentum towards the World Cup and eventually the Olympics where sevens will be played next time after Rio.”