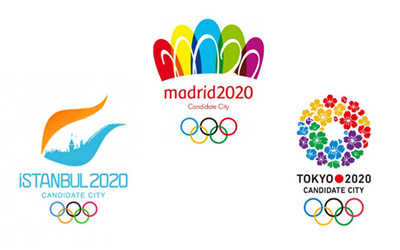 All three 2020 Olympic bid cities emerge with flying colours from the assessment report prepared for the International Olympic Committee and published today.

The report, true to its brief, draws no conclusions and offers no recommendations. However, deep within the detailed 110 pages are occasional challenges to all the cities.

The report opens on a positive for everyone – cities and the IOC – by stating that “the projects of the three candidate cities are of a high quality” and noting “that each city offers a unique approach to organising the Games . . . in its vision, concept and legacy.”

The report has been published to inform IOC members of the details behind the presentations they will hear from the trio in Lausanne. Further presentations will then be made ahead of the decision-day showdown at the 125th IOC Session [congress] in Buenos Aires on September 7.

The report was completed on April 19 which was before troubles erupted in Turkey, sparked initially by a protest against plans to build on Gezi Park at Taksim Square.

It reveals that both Istanbul and Tokyo were given a mild rebuke over initial suggestions of funding potential deemed to go beyond the IOC’s cost-control criteria.

An irony in the Istanbul assessment concerns the communications sector proposal that “an emphasis would be placed on the use of social media, particularly with regard to engaging young people.”

Social media, during the recent troubles, was roundly denounced by Turkey’s Prime Minister, Recep Erdogan, as “the worst menace to society.”

Addressing the environment theme, the reports underlines a need for caution regarding the cluster proposed site for golf, equestrian and a second basketball arena.

This is an “important plant area” which “would need to be developed and managed with great care to ensure its conservation status is sustained.”

A further challenge identified by the commission goes to the heart of the Istanbul concept of ‘one city, two continents.’  The vision of staging the Games on both European and Asian sides of the Bosphorus means “Olympic client groups would experience longer travel times and potential operational challenges.”

Turning to Tokyo, the report acknowledges a bid seeking to mix the old and the new, using the legacy of the 1964 Games venues within a 2020 framework.

It also notes that “with one of the most modern and efficient public transport systems in the world, the majority of client groups would enjoy short travel times. The concept lends itself to the possibility for Tokyo to create a city-centre Olympic celebration.”

City-centre projects do have their drawbacks, however. In Tokyo’s case the bid has been challenged on the projected high price of accommodation.

A major concerns within the Olympic movement has focused on energy provision in one of the world’s most volatile earthquake zones. The commission said it was satisfied that energy levels were now back to working capacity, two years after the devastating earthquake and tsunami.

Concerns about the vulnerability of  the Tokyo Bay area had been addressed with the ongoing implementation of robust new sea walls and breakwaters.

Turning to Madrid, the panel again identifies “a very compact Games concept” which “lends itself to . . . a city-centre Olympic celebration” with “no major transport infrastructure investment required.”

However a significant caveat concerns the long-time shadow cast by Spain’s ‘relaxed’ approach down the years to the fight against doping.

This was brought to worldwide attention by the trial and conviction earlier this year of Eufemiano Fuentes, the doctor at the centre of cycling’s blood-doping scandal.

The panel notes that “Spain has ratified the UNESCO International Convention against Doping in Sport” but that legislation in force when the report was concluded was not in line with the World Anti-Doping Code.

It adds: “the Spanish Government has committed to adopt new legislation in line with the code by the end of June 2013. Based on this commitment, Spain has been declared code-compliant by WADA.

“However, should the draft law be modified prior to its formal adoption or should the legal process take longer than foreseen, WADA would have to reconsider its assessment.”

As for the bidding process itself, the report also seeks to vindicate the costs involved as generating a mini legacy in their own right.

It says all three bids are of “an extremely high level and demonstrate detailed planning and comprehensive strategies in technical and operational matters, as well as many other areas including sustainability, the environment, legacy (both for the 2020 Games and for the bid itself), accessibility and integrated city development.

“It is clear that investments in Olympic bids will generate positive legacies irrespective of whether a city is awarded the 2020 Olympic Games.”

This will be an issue for another day and the next president of the IOC who will also be elected in September.

Right now, for the bids, the priority is the road to Buenos Aires.