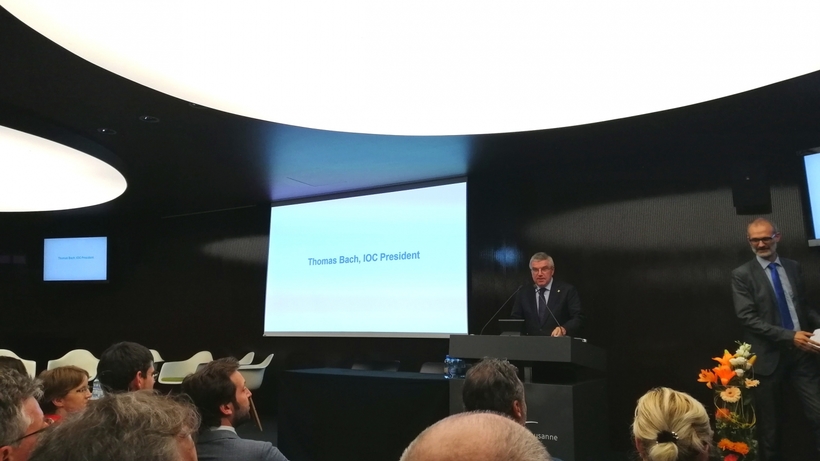 IOC President Thomas Bach opened the debate about the future of the Olympic Games at the fifth Sport Future Rendez-Vous on Wednesday in Lausanne with some frank observations about the mission of the Games and troubling trends in today’s world.

Organised jointly by ThinkSport and the University of Lausanne (UNIL), the sold-out event attracted more than 200 people from the academic world, sport organisations, United Nations institutions, NGOs, media and the business sector.

President Bach delivered a global overview about the IOC’s vision for the future of the Olympic Games driving the organisation’s reform programme Olympic Agenda 2020, developed under his leadership.

Aimed at strengthening the societal relevance and the uniqueness of the Olympic Games in a fast-changing world, Olympic Agenda 2020 is built on the three pillars of sustainability, credibility and youth.

Bach outlined strategies and results achieved in all of these areas and concluded:

He continued: “However, for the future we have to realise that we are against the Zeitgeist at the moment. We have a Zeitgeist changing from a healthy patriotism, one we appreciate in sport, to a nationalism which we don’t want to see in sport.”

“We see a Zeitgeist where societies are becoming more and more divisive – as well as relations between nations. International institutions are increasingly ignored.“

“These tendencies are contrary to our mission – which is to unite the world without any form of discrimination and in solidarity, enabling the world to join the Olympic Movement.”

“In sport we are all equal and if we achieve this universality, the Olympic Games can be a great symbol of humanity. This remains our ultimate goal.”