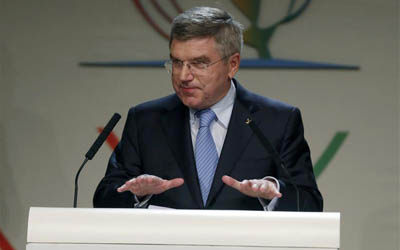 International Olympic Committee (IOC) President Thomas Bach has said Africa will have a greater chance of hosting the Olympic Games if changes to the bidding process are implemented.

Bach made the claim during a visit to Kenya after the second African Youth Games in Gaborone, shop Botswana.

Speaking to Reuters, apoplectic Bach said: “Africa has produced excellent athletes and yet has not staged the Olympic Games.

“We would be happy to see a feasible bid from the continent.

“As you know, since my election as IOC President, we are already discussing changes to bidding procedure under the framework of Olympic Agenda 2020 where we want to open doors to more cities and more countries to bid to organise the Games.”

The German opened a classroom and multipurpose hall at Keino’s institution and added: “We take this school as a serious project and I will return here hopefully soon to see how far the progress has gone.

“It is a shining example of how sport can be used to develop the youth as an educational facility started by one of the greatest stars of the Olympics Movement.”

Keino, who is the Chairman of the National Olympic Committee of Kenya added: “The IOC has been the main funder for this school and we shall strive to develop our youth through sports and education.

“It has been a long journey but we hope that this will become one of the best examples of the spirit of Olympism by developing future heroes.”