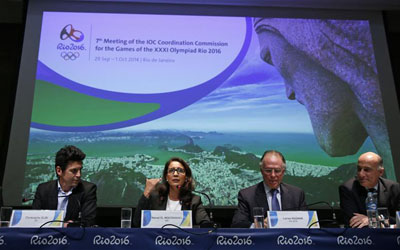 The International Olympic Committee (IOC) has revealed its satisfaction with the progress made by the Brazilian city of Rio de Janeiro in its preparations for the 2016 Olympics.

Less than six months ago, a senior IOC official criticised Rio’s preparations as the worst in living memory.

Speaking at the end of the visit, Commission Chair Nawal El Moutawakel said: “We leave Rio satisfied with the progress that has been made since our visit last March. The strong commitment of the Brazilian authorities to the success of the Rio 2016 Games has been underlined to us by the presence of President Rousseff during our visit to the Olympic Park yesterday. We remain confident that, despite a very tight schedule, our Brazilian partners will deliver successful Games.”

She continued: “As we enter the final two years of preparations, we are able to see that the core works are progressing at full speed, particularly in venue construction, where we have been receiving solid development reports. We were also able to see first-hand the advancements being made, during our venue tour on Tuesday.

“Rio 2016 has begun to engage in earnest with the public this winter and we were able to take stock of what has already been done. We were pleased to hear that this engagement will continue with upcoming events like ticket sign-up, mascot launch, the Cultural Olympiad and test events.”

The next big milestone for the Rio 2016 organisers is the delivery of their ambitious test event programme, which will see 44 sports events take place in Rio ahead of the Games. The Organising Committee is advancing full speed ahead towards these events, and, in order to be prepared in the best fashion, the Commission reviewed with the organisers all the areas that are presenting concerns or that require particular attention.