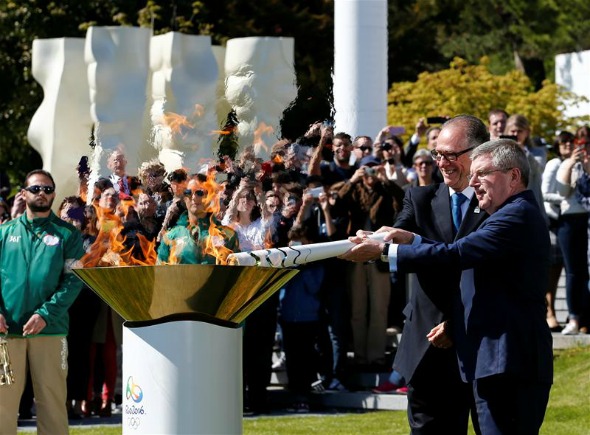 The build-up to the Rio 2016 Olympic Games has been far from ideal with worries about the Zika virus, financial issues for the Brazilian capital, and the doping scandal which has dominated headlines heading into the latest showpiece event.

While all Games seem to have slight issues in the build-up, which often end up fading away, the 2016 Games seem to be encountering more issues with every passing week.

IOC member Richard Peterkin explains how the Games have been faced with more external issues than he has ever seen before.

He said: “I have only been to four games with the IOC, out of those four this has been the most disruptive.”

“The only one that was problematic was Athens; and that was more about the issue of having the facilities ready on time.”

“I feel sorry for Rio as a lot of the issues have not been of their causing but they have been met with the perfect storm of bad news. The only positive thing is that the Games will go on. It may have a cloud over certain areas, and we may not have the best athletes, but the Games will go on with clean athletes.”

One of the biggest issues going into Rio is the doping scandal which has seen Russian athletes banned by the IAAF, as well as bans given out to Russia, Belarus and Kazakhstan by the weightlifting federation.

Peterkin believes that as there is not a blanket ban on the Russian Olympic Committee, it’s likely some Russian athletes will be able to win individual cases when they face the Court of Arbitration for Sport.

“The problem with decisions is you have to go according to the rules. The IOC in the past has allowed people to attend under neutral flags or the IOC flag, in all of those examples it was if the NOC was suspended or they didn’t have an NOC – like the Refugee team for example.”

“The issue here is the Russian NOC has not been suspended. The Russian NOC has a case to go to CAS on if it was not allowed to have its clean athletes attend under the Russian flag. What we are seeing is everyone is going to CAS and it may well be up to CAS to see what will and will not happen. I hate to see it that way as it’s not only legal decisions, it’s about what is doing right in the circumstances but in this world of charters you can’t just depart from it every time you wish.”

CAS recently told iSportconnect that were braced for an influx of cases, and were prepared to sit in Rio to hear urgent cases.

While the doping scandal has rocked the world of sport, it has also put a spotlight on the World Anti-Doping Agency (WADA) and whether they are strong enough to stay on top of doping in sport.

Peterkin was honest in his assessment of the past failings of WADA:

“It’s brought the matter to the fore as it perhaps should have been done previously. It has indicated that the technology and methods for testing has not been as robust as it should’ve been. It shows weakness in WADA about their ability to investigate – they didn’t have the powers or finances to do that.

“It was basically the media and whistleblowers that came out with the information we now have today. If nothing else, it is going to cause changes that will be positive in protecting clean athletes and punishing cheaters.”

Peterkin was speaking just a few days after Rory McIlroy announced that he wouldn’t be considered for the games over fears of Zika. He was later joined by Jason Day.

The former St Lucia Olympic President understands why the virus could affect athletes’ decision to attend the games.

“The science of Zika is not quite clear. A number of scientists have said it really is a lot more serious than we believe, and the World health organisation is saying it’s not as bad as it sounds and care is being taken.

“In Rory’s case he is young and wants to have children – he just doesn’t want to take the chance. I don’t think many athletes will follow that lead but some young athletes might. I think athletes have the right to go with their conscience.”

Richard Peterkin is currently a member of the Women in Sport Commission.

The committee welcomed the IOC proposing eight new members, with half of them being female

But Peterkin was also keen to see more done to promote women in high-profile positions in sport. Currently there is only one female president of a summer international federation, out of 27: Marisole Casado of the International Triathlon Federation.

“My experience as a newish member, only for 7 years, I’ve been impressed by the role of women on the IOC. The first meeting I went to I was overwhelmed at the International people who were there and the reasons they were giving for why we need more women in roles in the administration.”

“I’m seeing that the presence of women in high-level positions of decision making leads to better governance. It tends to be less driven by ego and power so you get more measured responses. I think it’s not just about athletes being represented on an equal basis but also seeing that at a higher level.”

“When I stepped down in St Lucia, the person who followed me was a women and I think we’ve become more effective. So I have seen it on a personal and local level. This is something the IOC supports as well. At the end of the day it’s the quality of the candidate and not just the gender.”

Peterkin has previously spoken of his ambition to see cricket played as part of the Olympics.

A recent rule change means that host cities have a much bigger role in choosing sports that they feel will be of interest to the local market, and Peterkin feels cricket could benefit from that one day:

“The most recent Twenty20 competition was evidence of how cricket could fit into the Olympics and the excitement of that competition clearly indicated it would be a good addition – particularly for India and Pakistan and Bangladesh.

“It’s been tried before, way back in 1910 or something, and obviously they didn’t have the one day or Twenty20 formats. The Commonwealth Games tried it in 1990 in Malaysia, but that wasn’t so successful, as some teams wouldn’t come like England. To bring it down to a shorter version allows for it to fit.

“The biggest problem I see is who represents the West Indies?! We are made up of a number of small countries, so we would have to field teams from smaller nations so it wouldn’t be a West Indies team. I see under the new arrangement for sports to be in the Games for a host city, that they could propose cricket and it could be considered.”

The IOC may have headaches in the short term, but Peterkin feels good decisions now are being taken to ensure there are not as many in the future.