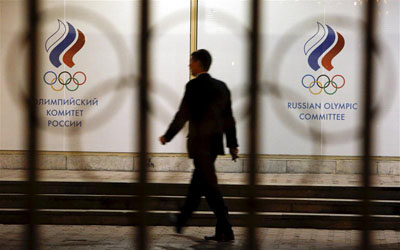 IOC Member Hayley Wickenheiser has praised the International Association of Athletics Federation’s decision to uphold the ban on Russian track and field athletes at Rio 2016.

The council made the ‘unanimous’ decision after a damning report by the World Anti-Doping Agency which accused Russian officials of preventing drugs testers from doing their jobs.

They came to the decision that the Russian Athletics Federation had failed to meet the reinstatement conditions.

Wickenheiser admitted that while some athletes who weren’t involved in doping may suffer, it’s a small price to pay to protect the virtue of the Olympic Games.

She said: “I commend the IAAF for upholding their ban on Russia and can only hope the IOC will continue to do so heading into the Rio games.”

“While there may be some clean athletes caught up in this issue sadly, the situation in Russia is so deep and pervasive that these athletes will no doubt suffer and this is the price that must be paid.”

“This is what is needed to show a strong measure in the face of widespread doping and ensure that we are protecting the clean athletes of the world and the integrity of the Olympic Games.”

The IOC released a statement over the weekend emphasizing that it fully respects the IAAF position and stating that “the eligibility of athletes in any international competition including the Olympic Games is a matter for the respective International Federation.”

The IOC have already said they would be unlikely to accept Russian athletes competing under the Russian Olympic Committee flag instead of a Russian one.

While on Monday morning WADA President Sir Craig Reedie applauded the IAAF’s decision on ARAF, saying some countries must commit to “culture change”.

Five-time Olympic medalist, Hayley Wickenheiser is regarded as one of the best female hockey players in the world with an uncompromised determination and dedication to her sport. However, it’s not just her lethal slapshot that is respected by her teammates, fans and peers; Hayley is also an award winner, community leader, mentor, history-maker and an accomplished businesswoman.

In the fall of 2011, Hayley was bestowed one the country’s highest civilian honours when she was amongst 50 notable Canadians appointed to the Order of Canada “for her achievements as an athlete and for her contributions to the growth of women’s hockey.” Most recently, she was inducted to Canada’s Walk of Fame.

Her election by her fellow competitors to the IOC in 2014 is one of Hayley’s personal greatest career accomplishments. She takes it as a grand honour and a grand responsibility to represent the voice of Olympians the world over. Hayley sits on both the Athlete’s Commission and the Medical Commission.