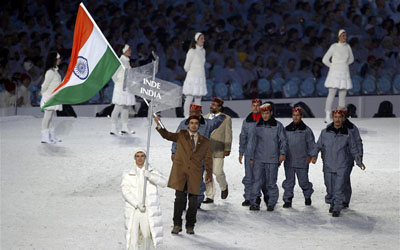 The Indian Olympic Association (IOA) has been reinstaed back into the Olympic family after the International Olympic Committee (IOC) removed the ban that had lasted over a year.

The IOA was suspended in December 2012 after they allowed ‘tainted persons’ to take part in their election process.

That election saw Lalit Bhanot, who had spent 11 months in jail on corruption charges, voted in as secretary general of the IOA.

Three Indian competitors at the Winter Olympics in Sochi were unable to take part in the Opening Ceremony on Friday and had been competing under an IOC flag.

The move comes after fresh polls to join the IOA board which saw Narayna Ramachandran, brother of Indian Cricket Board president N. Srinivasan, elected unopposed as president with Rajeev Mehta and Anil Khanna chosen as Secretary General and Treasurer respectively.

Ramachandran said on his appointment his main aim was to see the Indian flag raised at the Sochi Games, which the IOC confirmed it would be.

It also frees Indian athletes to take part in other worldwide events, including the Commonwealth Games in Glasgow later this year and the Asian Games.

A statement from the IOC read: “It is the first time in Olympic history that a suspension of an NOC has been lifted during an Olympic Games, and the decision will have an immediate impact.

“Indian athletes entered the Sochi Games under the Olympic flag during the Opening Ceremony on February 7, and have competed as Independent Olympic Participants.

“The decision means they can now compete for the National Olympic Committee of India and will walk behind their national flag at the Closing Ceremony on February 23.

“To symbolically mark the lifting of the suspension and in recognition of the three Indian athletes competing in Sochi, the Indian flag will be raised in the Olympic Village.”