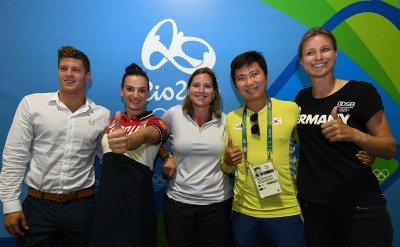 The IOC has announced the four latest members of the Athletes commission including banned Russian pole-vaulter Yelena Isinbayeva.

The other electees include Britta Heidemann from Germany (fencing), Seug-Min Ryu from Korea (table tennis), Daniel Gyurta from Hungary.

IOC President Thomas Bach said: “The athletes are at the heart of the Olympic Games. Their voice is very important in the IOC. My congratulations go to the newly elected members of the IOC Athletes’ Commission. We are looking forward to working closely with them to further advance the Olympic Movement.”

The four new members will replace outgoing members Claudia Bokel, Dae Sung Moon, Alexander Popov and Yumilka Ruiz Luaces, who were elected to the Athletes’ Commission at the Beijing Games in 2008 for a term of eight years each.

Claudia Bokel, who will be handing over the title of Chair of the Commission to Angela Ruggiero at the end of the Games, said after the announcement: “Congratulations to the four newly-elected members to the IOC Athletes’ Commission, which is the voice of all the athletes within the Olympic Movement. I wish them all the best in their contribution to the Commission under the leadership of incoming Chair Angela Ruggiero.”

On 21 August, Heidemann, Ryu, Gyurta and Isinbayeva will be proposed to the IOC Session for IOC membership. Pending approval, they will then be officially introduced at the Closing Ceremony of the Olympic Games Rio 2016 on 21 August.