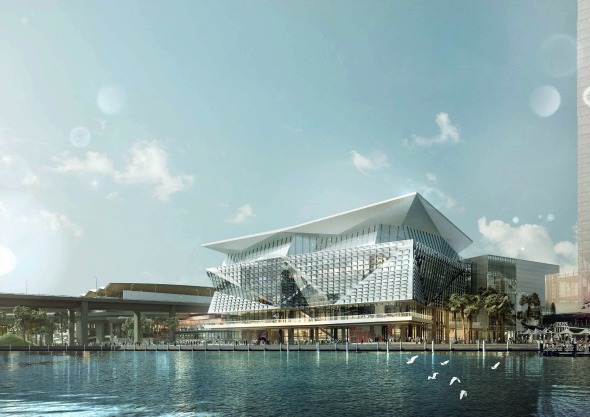 Innovation is a buzz word often used by businesses to sell their latest wares or services, or by politicians trying to rally support for a somewhat intangible idea. Over time ‘innovation’ has described everything from developments in space exploration, to ground-breaking techniques for healing the environment, or human body. Recent years have seen communication advances so extraordinary, that it’s little wonder the word innovation, for many, conjures visions of complicated, high-tech devices.

My colleague Paul Henry explains that at Populous Innovation is much more than technology or a single revolutionary invention – it is a way of thinking.

Innovation drives us from the first moment we contemplate a project. It’s at the core of our design approach, and all of our processes. The result is tangible in the physical spaces we help to create.

For sports architects innovative thinking is always about doing everything possible to connect fans with their teams, and their sporting heroes. Today’s fans want to get closer to the action. They want to make connections. They want to ‘experience’ rather than just ‘see’.

Where team warm-up and interview areas were once hidden away in a stadium basement, fan spaces are now designed directly adjacent to such areas, so more aspects of competition are visible, and competitors more accessible. The same purpose has seen the incorporation of field clubs in a number of recent stadium designs.

At Ascot Racecourse we shifted the parade ring to the town side of the grandstand to enable racegoers to have full view of weigh-in room and other features that celebrate the pageantry of the event and contribute to making a day at the racecourse unique.

Motorsport often does fan interaction well. Spaces designed to get fans close to pits and garages, and thus to drivers and their teams, drives excitement within an already highly-charged, adrenaline-fuelled environment.  It builds atmosphere.

Atmosphere is, of course, the lifeblood of any sporting event. It’s what gets a fan off the sofa and into a stadium. While better-than-ever technology has greatly improved home spectating, the live environment is the winner every time, in terms of atmosphere. Innovative stadium design leverages that advantage.

Building atmosphere is somewhat easier to do at temporary events. Motor racing, Football World Cups and Olympic Games are some of the big events where die-hard fans, or fiercely patriotic supporters, from across a country, or the globe, gather, cheer and spill across cities in celebration.

More innovative thinking is required to design permanent structures for regular sporting matches that promote the same excitement. How do we make the journey to an arena more exciting? How do we share an experience amongst a greater number than those able to fit inside? One of the answers is to design live sites, to engage fans outside of a stadium or arena. From big screens and stages, to food and merchandise spaces, we’re increasingly utilising outside space to expand the game day experience at permanent venues.

In contemplating the design for a stadium or arena, we’re also now asking ourselves, how can the building engage with the community? Stadiums and arenas can no longer be fortresses. We don’t want to see people disappear into a closed structure. These buildings must engage with their urban surroundings in a way that makes them dynamic neighbours. Those outside need to see life and energy inside, and those inside want to see out.

The recently opened T-Mobile Arena in Las Vegas is a great example of a building actively engaging with the community. Locally-sourced materials were used on the building’s exterior and aim to reflect the Spring Mountains and desert terrain. A 1,000 person balcony, and layers of exterior spaces with views of the Vegas strip, help to extend the building into its vibrant surrounds.

Similarly, in Sydney, the landmark International Convention Centre, part of the Darling Harbour Live development, was designed with a strong focus on connecting the building with its urban environment.

At Melbourne’s Margaret Court Arena specific design techniques were employed to make the building edge as permeable as possible. The concourse faces out to facilitate external engagement – people inside look out and connect to the city and city-goers along with those in the precinct, can see in.

Along with ensuring our buildings make a positive contribution to their local environment, and communities, innovative thought is important when looking at a building’s impact on the broader environment too.

While, as mentioned, there’s much more to innovation than the latest gadget, cutting-edge technologies do help.

The power of information and communication technology, mobile phones, apps, social media and WiFi, of course, helps create greater fan connection in a stadium, likewise innovative screen technology.  It’s no longer enough to just have the biggest screen, or the greatest number of screens.  Today we look at how we can wrap a stadium in screen, inside and out.

Virtual reality is impacting our industry just as it is many others. We’ve used this technology on recent projects, including the design of the NC Dinos baseball park in South Korea, to allow clients to ‘see’ the view from a certain seat in a stadium, or to experience an arena, well before foundations are laid. The instant feedback this facilitates is invaluable.

Virtual and augmented reality is also set to alter fan experience at live events. These advancements already allow fans to immerse themselves in video games at home. Immersing yourself in a live game, at the game, takes fan involvement to a whole new level.

In what may seem a contradiction, innovation – new ideas, rely heavily on experience. Good design innovation comes from years of pushing the boundaries.  Innovative responses to sports infrastructure challenges depend on designers having an understanding of not just architecture but sport, fans and the cities where our stadiums and arenas are built.

At the same time, we must always have an eye on the future. Buildings, of all kinds, are no longer able to be static. Today’s architects must design to accommodate for future requirements and for new resources that may become available. Stadiums and arenas are no exception, and must be designed so that they have the flexibility to evolve.

Innovation is not something that can be brought to the table by one individual. Innovative thinking doesn’t come from one brilliant source, but is instead a collaborative effort. It comes from having processes and structure that allow people to share knowledge. It comes from promoting creativity and investing in an environment that supports it.

We view innovative thinking in much the same way as a world-class sports team views winning – we achieve it by leveraging and harnessing the collective talent, rather than supporting one individual star. Renowned Australian rugby league coach Wayne Bennett described the premise well in a post-premiership win interview saying “… the knowledge that it was done by a team, and couldn’t have been done individually is what I love the most.”

The same is true at Populous. The lead on a new project has more than 500 minds to call on, more than 500 innovative views, put forward by experienced architects and sports fans. Equally satisfying as seeing exceptional social infrastructure coming to life, is knowing it could only have been done by the team.

Paul Henry is an internationally recognised expert in the design and master planning of stadia, racecourses, arena and the planning of Olympic Games.. Paul is a Senior Principal and sits on the global board of, Populous, as both an owner and Managing Director of the Asia Pacific region from the Brisbane base,

During his extensive career, Paul has led the development of world renowned sports and entertainment buildings including the design of the Darling Harbour Live in Sydney, Philippine Arena, Sydney Olympic Stadium, Suncorp stadium in Brisbane, Nanjing Sports Park in China, and the racecourses for the Hong Kong Jockey Club as well as many other major stadia in Australia. Many of Paul’s stadium designs have become a centerpiece for a city’s development.  Governments throughout Asia invite, Paul to lead discussions on the procurement and design of sports facilities to best suit the needs of a city and its community, and he speaks at high level conferences throughout the region. In 2010 Paul was made an Export Hero of Australia, the first architect to receive the award.