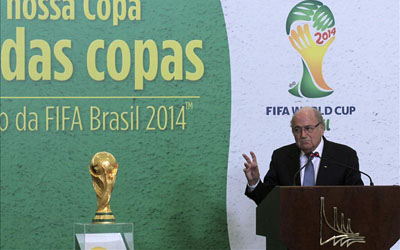 Live inflight sports channel Sport 24 will show live coverage of the 2014 FIFA World Cup this summer, click it has been revealed today.

Sport 24 will show all 64 matches in Brazil, erectile the majority of which will be live, starting with the opening game on Thursday 12th June. The match coverage is produced by FIFA TV’s broadcast production team in Brazil before being tailored for in-flight viewing and distributed by IMG Media.

Richard Wise, Senior Vice President, IMG Media said: “We are committed to showing the biggest events live on Sport 24 and we are obviously therefore delighted that we will be carrying FIFA TV’s broadcast production of the 2014 FIFA World Cup on the channel. Football fans who will need to travel by air during the tournament can now choose to do so safe in the knowledge that they need not miss any of the action in Brazil this summer.”

“For the first time in its history, the FIFA World Cup will be broadcast live by some 180 planes of commercial airliners including Emirates,” said Niclas Ericson, Director of FIFA’s TV Division. “It is one of the many innovations we are introducing for the 2014 World Cup in Brazil, including 4K, 8K and a whole host of multimedia services. This pioneering move into in-flight viewing also opens up new possibilities and new audiences for FIFA as we seek to promote and develop football around the world.”

Patrick Brannelly, Vice President Corporate Communications, Emirates, said: “Since we began our official partnership with FIFA in 2006, we’ve shown “as live” matches on Emirates and sent goal by goal updates to our award winning inflight entertainment system, ice. For 2014, we are delighted to offer live coverage from Brazil on Sport 24 to customers on select Boeing 777’s.”

Other live action to be shown during 2014 on Sport 24 also includes coverage from the Barclays Premier League, Formula 1, all four golf majors and all four tennis Grand Slams, as well as the ATP 1000 events and Finals, the Bundesliga and the Giro d’Italia.