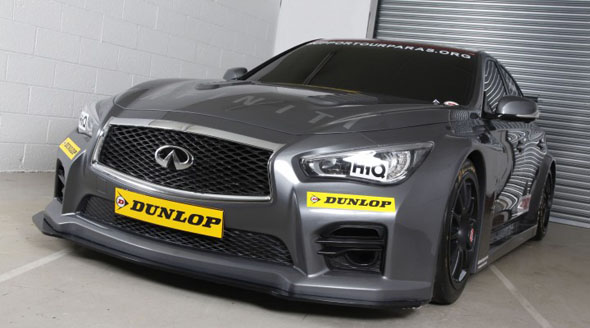 Infiniti, a major sponsor of F1’s Red Bull Racing, has announced it will launch a new team in the British Touricg Car Championship

The aim of the team is to specifically help raise awareness and funds for Support Our Paras, the official charity of The Parachute Regiment, one of the most iconic Regiments in the British Army.

The team, overseen by Team Principal Derek Palmer, will consist of a number of injured Paratroopers who will work on the cars to prepare them not only for race weekends, but also maintain their maximum efficiency throughout the hectic schedule of a BTCC season.

The team has also set itself the ultimate long-term goal of developing, training and ensuring an injured Paratrooper graduates through the racing ranks to pilot an Infiniti Support Our Paras Racing car in the future.

“We’ve set ourselves a number of significant, but achievable targets,” Team Principal Palmer stated. “Of course we are aware of the challenges ahead of us, but with the united forces of The Paras and Infiniti, we believe we have the power to deliver results in the BTCC.”

Steve Oliver, Infiniti Regional Director for North Europe, commented: “To have an Infiniti on the starting grid in the BTCC next year will be an exciting event on its own, but to have the car represent the Parachute Regiment’s main charity makes it exceptionally worthwhile.

“Infiniti is establishing itself as a main player in the premium sector in the UK, with sales on the increase, a new design Centre in Paddington London and from next year we will manufacture the first Infiniti for Europe outside of Japan from the plant based in Sunderland. These race cars reinforce our commitment to the UK and provide an ideal platform to link together two truly British establishments, The Parachute Regiment and the BTCC.”

The two NGTC Infiniti Q50 race cars will be driven by Richard Hawken (Walton-on-Thames) — who has won three championships at club level and tested for Speedworks in 2013 — and Derek Palmer Jnr (Lanark/Zurich). Both drivers have raced successfully in Super Touring Cars in recent years.

The team will be operating out of a newly-refurbished HQ at Mallory Park. The Leicestershire race circuit started life as Royal Air Force Station Kirkby Mallory, a standby landing ground during WWII before closing in 1947.