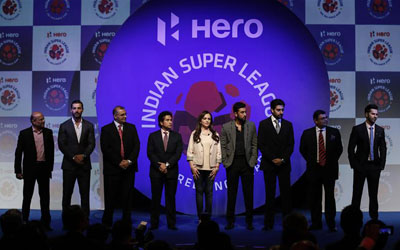 The Hero Indian Super League has announced that the league has signed up six iconic brands from diverse industry verticals as sponsors and partners for the league.

The League is set to kick-off on Sunday, health October 12th, medicine 2014 at the Salt Lake Stadium, cialis Kolkata.

Joining Hero MotoCorp Ltd – the Indian Super League’s ‘Title Sponsor’, is Maruti Suzuki which has signed up as the ‘Associate Sponsor’. The Indian Super League is not limited only to automobile manufacturers as leading brands across industry verticals like the FMCG sector, Finance and Sports have all signed up in support of the League.

Sanjay Gupta, COO, Star India mentioned, “We are a few days  away from the kick off of the Hero Indian Super League and it has gained excellent traction as is evident in the number of sponsors lined up to support the league. The response from sponsors has been overwhelming and the League has attracted a wide range of marketers from a variety of industries. Hero is the Title Sponsor for the league while Maruti Suzuki – has signed on as the Associate Sponsor for the league. The league will also be supported by FMCG, sports and finance brands like Amul, Pepsi and Puma, along with Muthoot Finance and Dr Reddy’s Nise Gel.

“We welcome these brands on board to support the Hero Indian Super League – a league that is bound to change the development trajectory of Indian Football. Football is an aspirational sport with mass appeal and a deep youth connect. This is a historic opportunity for brands to be part of the birth of a footballing nation.”

The Hero Indian Super League is co-promoted by IMG-Reliance (the joint venture between IMG and Reliance Industries) and Star India along with the support of All India Football Federation (AIFF).