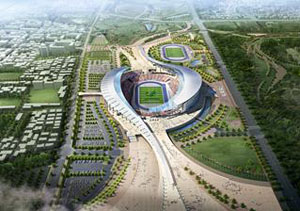 The competition is set to begin on September 19th in Incheon, South Korea.

The stadium for the 17th Asian games was designed by Populous in association with local firm Heerim Architects and Planners and illustrates a new level of sustainable design in stadia in Asia.

The multipurpose stadium will hold 60,000 people during the Games will reduce down to a single sided grandstand for 30,000 afterwards as a People’s Park for the city of Incheon.

Legacy and sustainability were the driving factors in designing the stadium in Incheon. Populous Senior Principal Andrew James, commented: “We wanted to take a fresh look at the way we treat adaptable stadia in Incheon.

“This approach provided multiple advantages. Financially it reduced the building by two thirds meaning there are substantial savings in operational and maintenance costs. Secondly, it meant the permanent seats could be sited in the optimal position for these sports, in this instance, in the West stand.

“But the biggest advantage in the design is the freedom it provided in terms of legacy. The plans were always based on a community park, which after the Games, will replace the Eastern stand, forming a traditional stadium hill, with plazas on the north and south ends, providing atmospheric spectator viewing during a match , and a green space for the public to enjoy at all other times.