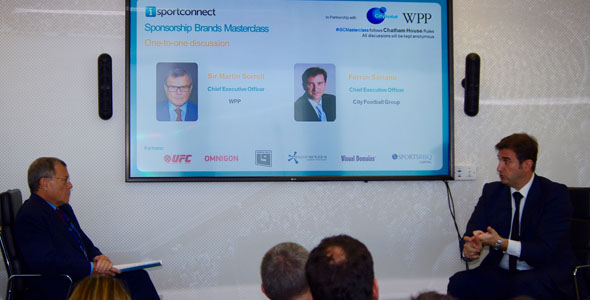 The Masterclass was held at the City Football Group London Office where 30 of the world’s leading brands gathered for the unique event.

The event was kicked off by guest speaker Sir Martin Sorrell, CEO of WPP, who addressed the delegates and gave an overview into WPP and an insight into the general trends in the business world.

Sir Martin then moderated a one-to-one discussion between himself and Manchester City and City Football Group CEO Ferran Soriano.

That was followed by a panel discussion between three major brands, moderated by WPP’s Business Development Director, Jonathan Lenson.

Speaking after the event, Sir Martin Sorrell said: “We really enjoyed it, it was interesting, we had the audience engaged and asking a lot of questions, we covered the global context of city football group and football and soccer as a whole.

“I was very pleased with the engagement from the audience, we spoke about sponsorship, the value of sponsorship, how sponsors can get value, how digital media is changing the nature of the sport and the sponsorship of it, all in all it was a very good morning.”

Sir Martin was especially impressed with the format of the event and the interactivity with the audience.

“It was very good, Ferran was willing to answer all the questions which was good,” he added.

Manchester City and City Football Group CEO Ferran Soriano added: “It was interesting; it was really good we were discussing really insightful issues and there was a lot of interesting participation from everybody here.”

Like Sir Martin, Soriano was also happy with the interaction between the panellists and the audience.

He said: “This was very, very important, it wasn’t just about somebody talking and a lot of people listening, there were very interesting and insightful questions that brought new insights, so actually the participation was very important.”

Red Bull’s Dominik Mitsch was happy to share a room with members from other major brands and from the same industry.

He said: “It was a brilliant opportunity to meet other people from different sports, other brands, getting them all under one roof, it was a great event and a great occasion.”

Describing the format of the event, Mitsch added: “I think it was very well done, it was faultless, I couldn’t do it any better and the panel worked very well.”

Delegates at the Sponsorship Brands Masterclass

Networking in full flow at the Masterclass

iSportconnect would like to thank all of our panellists, delegates and partners for a fantastic Masterclass. Video highlights will be available through iSportconnect TV soon.

iSportconnect will hold three Directors’ Club events in November, two in the Middle East in Abu Dhabi and Dubai before a return to London for the final event of 2014.

Another Brands Masterclass will be held in 2015, the date will be confirmed at the end of the year.