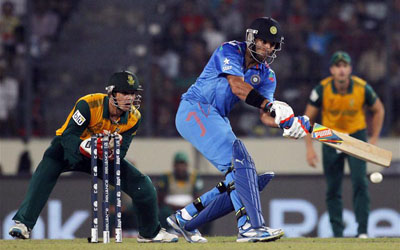 The International Cricket Council (ICC) has signed it’s biggest-ever global broadcast partnership by jointly awarding its audio-visual rights for ICC Events from 2015 to 2023 to Star India and Star Middle East.

The decision was made by the ICC Business Corporation (IBC) Board, ICC’s commercial arm, during a meeting at the ICC headquarters in Dubai on Sunday. The decision followed a robust tender, bidding and evaluation process, which started in July 2014. During the process, which involved two rounds of bidding, the ICC received 17 competitive bids from various broadcasters across different territories for its audio-visual rights.

While the final value of the rights fee agreed was not disclosed, it is significantly in excess of the ICC’s previous commercial deals.

The current cycle has seen ESPN Star Sports hold the audio-visual rights until the contract expires at the end of next year’s ICC Cricket World Cup 2015.

Commenting on the decision to name Star India and Star Middle East as its successful bidders, ICC Chairman Mr N. Srinivasan said: “We are delighted that our partnership with the Star group has extended to the next cycle of ICC Events. This illustrates the strong relationship we have built in the current cycle and the value we have delivered since 2007.

“Star has an outstanding reputation as a sports broadcaster and has played an integral role in promoting and growing the game by taking coverage of ICC Events to a truly global and record-breaking audience, and we look forward to this continuing for another eight years.”

Uday Shankar, CEO, Star India, said: “We are delighted and honoured to extend our partnership with ICC. This is a tribute to Star’s commitment and ICC’s trust in our ability to take the great game of cricket to the next level. Star will constantly attempt to reinvent the viewer experience to make cricket bigger and bigger.”

The agreement means Sky Sports viewers can enjoy exclusive live coverage of 14 ICC competitions, offering over 250 days of live cricket between 2015 and 2023.  STAR has been awarded the global rights from the ICC and Sky Sports has an exclusive arrangement with STAR for broadcast in UK and Ireland.