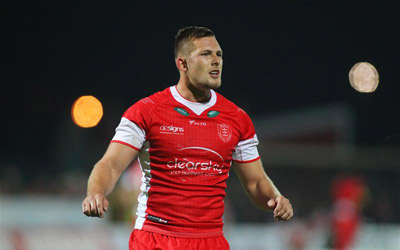 English rugby league club Hull KR has agreed a deal with long-term sponsors Malcolm West Forklifts that will see them appear on the club’s shirts for the first time in 2015 after the firm extended its partnership with the club.

The company has been associated with the club for over 20 years and will now appear on the chest of both the home and away shirt for next season.

“Malcolm West himself having associations with the club for over 30 years was a major driving force behind this decision and it makes him extremely proud being a local Hull lad to be able to support such a proud and famous team as Hull KR.

“We wish the club all the very best for the up and coming season.”

Hull KR’s commercial manager Bobby Bahadori added: “Malcolm West is a name familiar to many people across the region and especially to our supporters given their long association with the club.

“As well as being regulars both at the KC Lightstream Stadium and away from home, they have been player sponsors for over 20 years and I’m delighted they have now taken the next step in sponsoring our home and away shirts.

“Although the designs are a closely guarded secret, we are sure everybody at Malcolm West will enjoy watching the team run out in a kit bearing their name in 2015 and we look forward to working with them further over the next 12 months.”