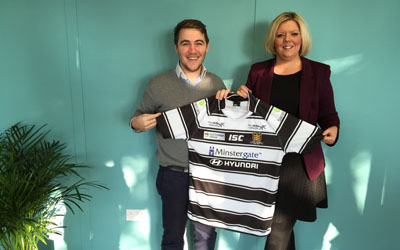 Bartercard’s branding will appear on the sleeve of the club’s special 150th anniversary shirt, online with the international company also benefiting from other multi-platform rights under the partnership.

The deal was brokered by Miller Sports after Hull FC extended a partnership with the consultancy, which is already on the look-out for sponsors to support the club’s 2016 season.

“For a company of the calibre of Bartercard to renew a deal for the 2015 season is a huge endorsement of the commercial appeal of Hull FC and rugby league in general on a regional, national and international basis,” Miller Sports Managing Director Laura Miller said.

“The 2014 Super League season set a number of national television audience records in the UK, and with the reintroduction of promotion and relegation in 2015, there will be plenty of interest in the competition across the country.

“Our goal is to identify ‘win-win-win’ partnerships for our clients – so the sponsor, club and fan can benefit – and this is certainly the case with a company as innovative as Bartercard.

“We have developed a tremendous relationship with Hull FC over the past two years, and we look forward to identifying more partners who will come on board for the coming seasons.”

Hull FC Commercial and Operations Director Sarah McAllister added: “We are delighted that Bartercard have continued their sponsorship into our 150th anniversary year following a successful debut year with Hull FC in 2014.

“Hull FC are proud to work with Miller Sports Consultancy, which has a wealth of experience in bringing national and local brands together with sports clubs to create long-lasting commercial relationships.”