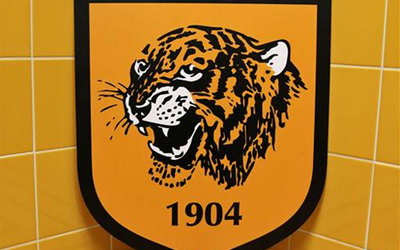 Premier League football club Hull City have unveiled a new crest for the 2014-15 season, which does not have the club’s name attached.

The badge has a picture of a tiger’s head and the year the club was founded – 1904.

The badge re-launch comes shortly after the club’s owner Assem Allam was told he could not rename the club the Hull Tigers by the Football Association in April.

Allam described the word city as “common” and wanted to change the name to make the team more marketable in other territories.

His decision was met with great opposition from fans and pundits alike, and the new nameless badge has also been met with criticism.

Mark Gretton, of fans’ group City Till We Die said: “Why, when the club is more successful than ever, would you not tell everyone your name?

“The FA has no jurisdiction over badges, but this undermines their judgement. We have become the club with no name. It is remarkable. We have a global brand already. It is Hull City. Our nickname is the Tigers.”

Despite this, the club’s vice-chairman Ehab Allam said the new crest is a: “more stripped back and modern approach which still celebrates the club’s heritage and history.”

To read an in-depth interview with the club’s former Managing Director on the proposed name change, click here