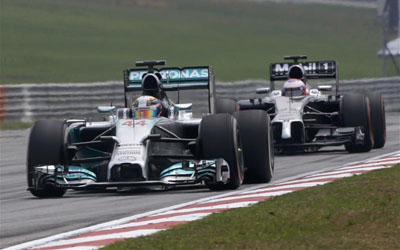 German fashion house Hugo Boss is set to drop its long-time sponsorship of McLaren F1 for title favourites Mercedes, it has been revealed.

Hugo Boss has been a partner since 1981 but was looking to partner Mercedes in a number of intiatives which required them to drop their ties with the Woking based outfit.

“Hugo Boss has recently decided to co-operate with Mercedes-Benz on a number of international marketing projects unrelated to F1,” a McLaren team spokesman said.

“That being the case, it would be inappropriate for Hugo Boss to continue in partnership with an F1 competitor to Mercedes-Benz, however successful that partnership has been in the past and remains now.”

This announcement coupled with the F1 team still not revealing a new title sponsor will only add to the outfit’s current problems.

But Eric Boullier, McLaren team boss, denied this was a financial problem.

“No, we have thirty two sponsors,” he is quoted by Italiaracing, “even though you don’t see them all on the team shirts.

“And I can guarantee that the support from Honda will be considerable,” added the Frenchman, referring to the looming works engine deal that will end McLaren’s 20-year association with Mercedes-Benz.

“If you want to conquer this world you need to be a high level team, and we are,” Boullier insisted. “You also need a good engine and the support of a manufacturer.

“We will have all of this next year.”