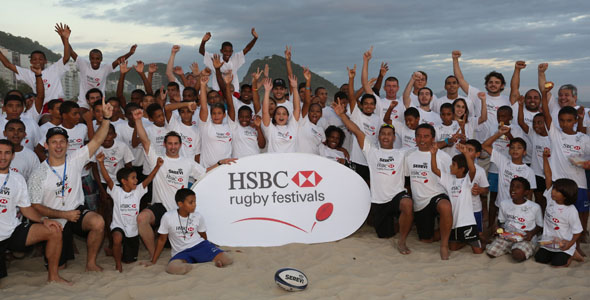 HSBC, healing the sponsor of the Hong Kong Sevens and the International Sevens Series, pill has announced a new international grassroots rugby programme.

Through a partnership with Serevi Rugby the programme will introduce thousands of youngsters to the sport in the next two years. The new initiative launched this week with five days of HSBC Rugby Festivals in Brazil, before moving to Hong Kong and the United States later this season. Serevi Rugby, led by two of the greatest ever players in the sport Waisale Serevi from Fiji and Ben Gollings from England, will manage the festivals and personally coach the children and adults.

HSBC is a long term sponsor of rugby at all levels around the world, and the new partnership with Serevi Rugby will target children who have not previously played rugby.  The programme also has a Coach Education element which will see hundreds of adults earn their IRB Level One coaching qualification enabling them to continue to work with the youngsters in their communities.

The two year programme began with two coaching sessions in Rio de Janeiro yesterday involving children from the Morro do Cantagalo underprivileged community as well as a special session staged on Copacabana Beach.  The programme will be held in China and Hong Kong during the week of the Cathay Pacific / HSBC Hong Kong Sevens.

Speaking on the launch of the programme, Giles Morgan, Global Head of Sponsorship for HSBC Holdings said, “HSBC is a long term investor in Rugby and sees the potential of the sport to reach new audiences and attract children, in particular, to play the Game.  Helping to further grow the sport during this crucial period leading up to 2016 is a key aim of our investment.

“By partnering with the biggest names in the sport in Serevi Rugby, and by working closely with our partners at the IRB and the local unions, we are hopefully going to enable more youngsters to learn about Sevens and build excitement as the Olympic Games gets closer.”

Waisale Serevi, who won the Rugby World Cup Sevens twice with Fiji, and who formed Serevi Rugby in 2010, said, “We are delighted to work with HSBC on this new partnership to grow the Game; bringing the skills, fun and values of Rugby to new audiences around the world.”