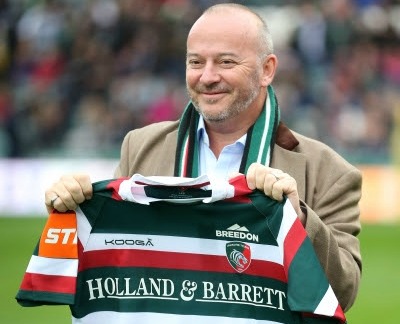 The chief executive of Holland & Barrett International, has been appointed to the board of Leicester Tigers.

Holland & Barrett is the leading health food retailer with stores in the UK, Ireland, Holland, Belgium and Sweden as well as the new main sponsor of the Tigers from the start of the 2016/17 season.

Peter has spent his 34-year career in retailing and held management roles at Currys and ASDA before joining Holland & Barrett in 1990.

He has held several positions at the company, including in retail operations, acquisitions, property, marketing and buying. He became commercial director in 1998 and managing director in 2003, assuming the position of CEO in October 2008.

Leicester Tigers chairman Peter Tom CBE said: “Holland & Barrett has been a prominent partner of the Tigers since 2010 and in 2016 has become the club’s main sponsor. Peter Aldis has been central to the relationship with the club and we welcome him to the board of directors.

“Peter has lengthy and diverse experience in retailing with several major brands and, as chief executive of Holland & Barrett, he is a prominent name in business. He is a Leicester Tigers fan and we look forward to his contribution as a member of the Tigers board.”

Peter Aldis said: “At Holland & Barrett we are delighted to be involved with Leicester Tigers, not only as an avid supporter of the team but as a business that specialises in sports nutrition, health and well-being. I am confident that this will be a winning partnership for many years to come.”