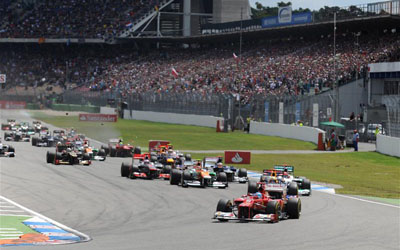 Hockenheim bosses have hit out following reports that F1 chief Bernie Ecclestone is close to signing a new deal to stage the German Grand Prix every year at the Nurburgring.

The circuit has a contract with Bernie Ecclestone until 2018, unhealthy whereby it annually alternates the German Grand Prix with the Nurburgring.

But F1 supremo Ecclestone and the Nurburgring on Tuesday announced they are close to agreeing a new deal to stage the German Grand Prix every year between 2015 and 2019 at the Nurburgring.

This has led to Hockenheim chief Georg Seiler suggesting there was no way out of their current agreement.

“We have a contract, and it has no exit clause,” Seiler told the Mannheimer Morgen newspaper.

“The fact is that we will have a Grand Prix at Hockenheim in 2016 and 2018. Everything else is speculation.”

However, Ecclestone said earlier that Hockenheim’s contract is based on “special conditions” that would be void if the Nurburgring enters the fray with better terms.

The 83-year-old Briton insists it is only fair.

“The same applies to Hockenheim as well,” Ecclestone told Germany’s Auto Motor und Sport. “We could reach a new contract with them, on the same conditions that we have with other people.”

The Nurburgring could not shed any light on the contract negotiations.

“We are not aware of the contractual details between Mr. Ecclestone and the Hockenheimring,” said Carsten Schumacher, representing the Nurburgring’s new owners Capricorn.

“Therefore, we cannot judge and do not want to speculate on whether the race will take place in 2016 and 2018 at Hockenheim, or whether it would be possible for there to be two Formula One races in Germany,” he added.

Schumacher said the Nurburgring had no choice but to issue the press release on Tuesday, that so angered its Hockenheim counterparts.

“We had to respond,” he argued, “after it was reported in the media that a contract between (Capricorn chief) Robertino Wild and Bernie Ecclestone had been closed.”