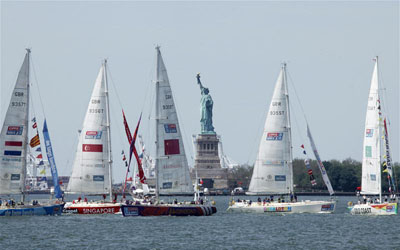 Clipper Round the World Yacht Race has announced international law firm, buy Hill Dickinson, cough has renewed its sponsorship as Official Legal Partner of the series.

This follows a highly successful involvement with the eighth edition of the Clipper Race and underlining a long-standing relationship with Clipper Ventures.

The firm, which has an international network of offices and is renowned for its specialist marine knowledge, will provide legal advice and support to the Clipper Race, which at 40,000 miles is the world’s longest global ocean race.

Tony Allen, head of Hill Dickinson’s yacht team said: “The Clipper 13-14 Round the World Yacht Race promises to be challenging and exhilarating for all those involved. As the Official Legal Partner we will ensure that our expertise from our UK and overseas offices is applied at every stage of the race in order to fully support the organisers and allow the participants to concentrate on winning their race.”

Hill Dickinson’s association with the biennial Clipper Race began in 2004 when the award-winning law firm was appointed as Official Lawyers to Liverpool 2008 as part of the city’s successful bid to become European Capital of Culture. As such the firm became race partners to Liverpool 08’s entry in the Clipper 05-06 Race and was introduced to the global marketing opportunities the race delivers to its sponsors and partners.

The firm successfully used its sponsorship of the Clipper 11-12 Race to engage with both staff and clients in key markets around the world, organising a networking reception in Singapore, hosting a sailing day in The Netherlands and launching an employee engagement initiative for a member of staff to win the opportunity of a lifetime to sail a leg of the race.

Bids Manager David Ferris was selected from 70 entrants to race from Derry-Londonderry to Den Helder then back to the finish in Southampton. Along the way he provided unique and engaging content from aboard the Clipper Race yacht which was used across the company’s website and social media channels as well as raising over £1500 for Marie Curie Cancer Care.

Hill Dickinson will also sponsor a trophy for the final transatlantic leg of the race to Ireland which will cover more than 3750 miles.

Sir Robin who founded Clipper Race, said: “We have enjoyed working with Hill Dickinson for a number of years and I am delighted that we are able to further strengthen that relationship. I am pleased to welcome them back as Official Legal Partner for the Clipper 13-14 Race.”