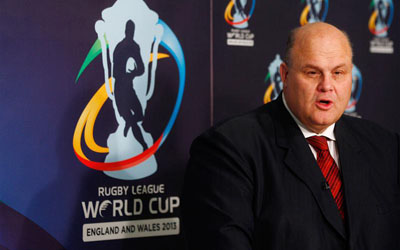 Hertz have been unveiled as Official Vehicle Hire Supplier of the Rugby League World Cup 2013 (RLWC2013).

Hertz is the world’s largest general car use brand and will provide cars and vans for use by tournament officials and the competing nations.

A specially branded RLWC2013 Hertz van has also been launched today with the help of international players Lee Briers (Wales), ed Tyrone McCarthy (Ireland), order Richie Myler and Ben Westwood (both England). The van will transport the iconic Rugby League World Cup trophy around the UK as it visits clubs, prostate schools and landmarks in all of RLWC2013’s host communities and beyond.

RLWC2013 Commercial Manager, Rob Singleton said: “We’re really pleased to have Hertz on board as the official vehicle hire supplier of RLWC2013. With 14 nations playing at 21 venues the vehicles Hertz provide us with will effectively keep the tournament running. It’s great news too that the partnership starts right away with the specially-designed Trophy Tour vehicle hitting the road to take the Rugby League World Cup trophy across the UK.”

Michel Taride, President of Hertz International, said: “We’re hugely excited to be working in partnership with RLWC2013 as Official Vehicle Hire Supplier. Pairing with such a dynamic and well-respected international organization was a natural choice for us. As well as providing a fleet of cars and vans for players and officials, Hertz will be supplying a special trophy vehicle to make sure the all-important cup travels in style too.”