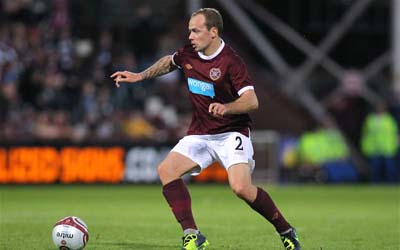 Three senior Hearts players have accepted a 50% wage cut in an effort to ease the crippling financial issues at the Edinburgh club.

Full-back Jamie Hamill (pictured) has joined Jamie Macdonald and Ryan Stevenson in making the decision, whilst Scotland U21 defender Kevin McHattie is reportedly close to doing the same.

The Scottish Premier League (SPL) side are in serious financial woe, with debts of £25m ($39m) to Lithuanian firms Ukio Bankas and UBIG, who are major shareholders in the club.

Administrators BDO say Hearts need to sell 3,000 season tickets at Tynecastle over the next ten days if they are to survive – 1,200 have been sold since Friday.

Speaking about his pay cut, Hamill said: “It has been difficult with the club going into administration but I spoke to the gaffer and my wife about the situation and decided it was best to stay here, as I just want to play at Tynecastle.

“I have been out injured for so long and missed a couple of cup finals, so I feel there is unfinished business here for me. I am just looking forward to pushing on now.

“It is going to be a tough season for us but I’m looking forward to getting back playing again.

“We want to help the gaffer out as it is going to be a very young team, so hopefully the experienced guys can help us close that gap, with us starting the season at minus 15 points.

“We need to stick together and focus on starting the season as well as we can.

“The fans have been magnificent in buying as many season tickets as they have. Hopefully they can keep up the good work to reach the target set by the administrators.”