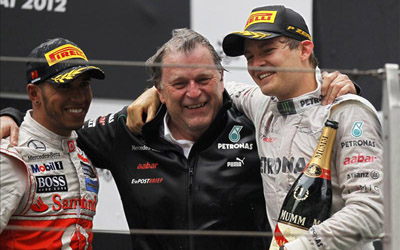 The head of Mercedes-Benz motorsport, Norbert Haug has decided to step down from his position at the end of the month.

The 60-year-old German has held the position since October 1990 but Mercedes announced in a surprise statement on Thursday that Haug will “conclude his career at the end of 2012” when his “contract will come to an end by mutual agreement”.

Although Mercedes give no official reason for the unexpected parting of the ways and say preparations for the 2013 season – which sees the arrival of Lewis Hamilton at the team – will continue as normal, the separation comes at the end of a disappointing campaign for the German manufacturer’s works team.

Despite winning their first grand prix since the 1950s with Nico Rosberg in China, the outfit slipped further off the pace as the season progressed and ended up only just fending off Sauber for fifth in the Constructors’ Championship.

As part of the announcement in September that Hamilton was joining the team on a three-year deal, Mercedes also revealed that former World Champion Niki Lauda had been appointed as non-executive chairman on their F1 board.

Haug had played a leading role in Mercedes’ return to F1 in the mid-1990s, initially as solely an engine supplier with first Sauber and then McLaren, and then, from 2010, as a team owner.

But speaking in the statement announcing his imminent departure, he expressed regret that the team “couldn’t fulfil our own expectations” over the past three years.

“I would like to thank the best car company in the world for more than 22 years, which never had a single moment without passion for me,” Haug said.

“I particularly wish to thank the Board for the trust and freedom they have always given me with all my activities. Since 1991, we had tremendous achievements and wins, for which I want to thank all of my colleagues.

“Unfortunately, with one victory in 2012 since founding our own Formula 1 works team in 2010, we couldn’t fulfil our own expectations. However, we have taken the right steps to be successful in the future. Our team and our drivers will do everything to achieve these goals.”

Dieter Zetsche, the head of Mercedes-Benz Cars, paid tribute to Haug’s achievements over the past two decades.

“Norbert Haug was the face of the Mercedes-Benz Motorsport programme for more than 20 years,” Zetsche said.

“For me, he put his stamp on a whole era and, as a highlight, he was responsible for the successful comeback of the Silver Arrows to Formula 1. In the name of the Board of Management and the whole motorsport family, I would like to thank Norbert for his extraordinary commitment to the three-pointed star.”