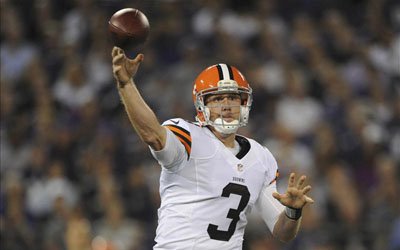 Jimmy Haslam has completed the purchase of Cleveland Browns and has wasted no time in stamping his authority.

Shortly after his takeover was officially approved by NFL owners on Tuesday, Haslam will remove current team president Mike Holmgren and replace him with former Eagles CEO Joe Banner.

Haslam confirmed in a Tuesday news conference that Holmgren will leave the Browns organization at the end of the season and will retire.

“We are going to bring in Joe Banner,” said Haslam, adding that Holmgren and Banner would work together on the transition. “Joe will be the CEO of the team, and that will be effective on Oct. 25.

“He will be in charge of the daily operations of the organization. Football will report to Joe. We will be heavily involved.”

Haslam’s $1 billion purchase of the Browns from Lerner will officially close on Oct. 25.

Haslam was asked whether he tried to talk Holmgren from an ourtright retirement from the Browns’ organization.

“Mike had exactly in his mind what he wants to do, what he wants to do with the rest of his life,” said Haslam, who confirmed the talks to replace Holmgren had been ongoing for some time but ramped up Sunday night as the move was being finalized within the organization.

Holmgren, 64, was hired on Jan. 5, 2010 by outgoing Browns owner Randy Lerner with much fanfare — the former head coach of the Green Bay Packers and Seattle Seahawks was expected to turn around a sad-sack franchise that has made one playoff appearance since its return to the NFL in 1999.

But Holmgren, while admired for his coaching acumen, has not been regarded as a skilled talent evaluator in league circles, which led to him losing his general manager designation with the Seahawks in 2002. Since arriving in Cleveland, his winning percentage with the club is .263. Only the Carolina Panthers have fared worse (.243) since 2010.