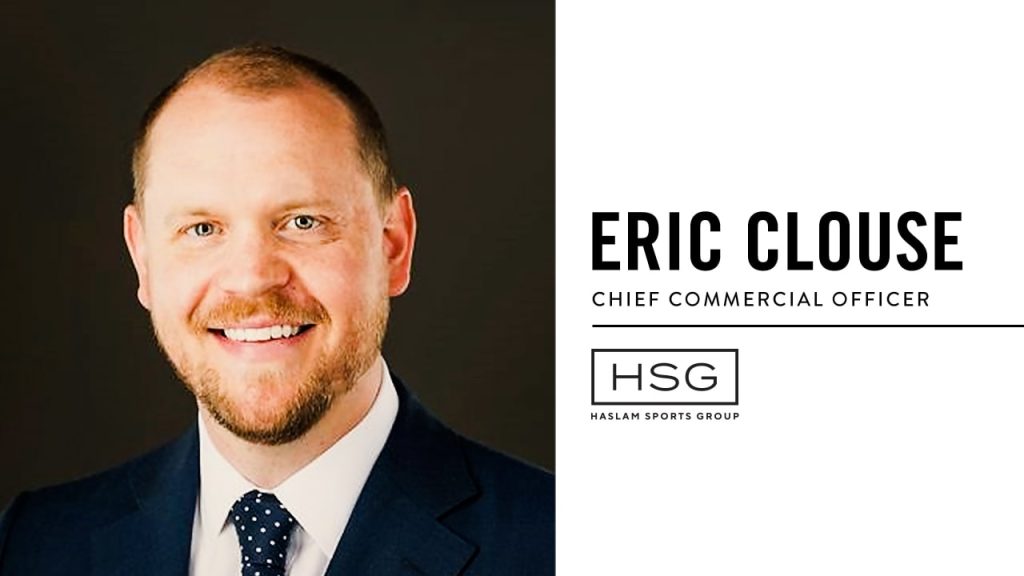 Haslam Sports Group (HSG) today announced that Eric Clouse has been hired as its Chief Commercial Officer. Clouse will oversee revenue and marketing departments for the Cleveland Browns and Columbus Crew, collaborating with leadership at both organizations to maximize initiatives related to ticket sales and services, business analytics, fan engagement, corporate partnerships and digital content and production.

Clouse has spent the past 10 years with the Cleveland Cavaliers, including as the team’s Senior Vice President of Sales and Service since 2019. In the leadership position, he directed all of the Cavs’ ticket sales, including premium and hospitality experiences, and was integral in the team becoming one of the most successful corporate partnership departments in NBA history. Complementing his commitment to delivering business results, Clouse has been dedicated to guiding and developing more than 70 current team members in his previous role, strengthened by a proven track record of past direct reports securing promotions within the sports and entertainment industry.

“While our HSG leadership team was impressed by Eric’s ability to achieve and exceed business goals, we are equally excited about his unique energy and ability to motivate others in a team environment that emphasizes both collective and individual growth,” said HSG Executive Vice President and Chief Operating Officer Dave Jenkins. “With 10 years of experience in Cleveland, Eric will be another key member of our executive staff who has a firm understanding of the local sports landscape and important business relationships, as well as other dynamics specific to our region that will benefit our fans and partners in Northeast Ohio and Columbus.”

“I am incredibly grateful for the opportunity to join Haslam Sports Group and the Cleveland Browns, and I look forward to helping continue to build upon our teams’ current culture and the positive momentum in all facets of our business,” said Clouse. “Spending a significant amount of my career in Cleveland, I have a deep appreciation for the region’s passionate sports fans, as well as many meaningful personal and professional relationships during my time in our great city. We are all excited for the 2022 seasons, especially as we identify new ways to engage our fans, partners and team members with the focus of providing them the best experiences possible throughout the year.”

Prior to being named the Cavaliers’ Senior Vice President of Sales and Service, Clouse worked for the team’s suites and premium seating department (vice president, 2016-2019; senior director, 2014-2016). In 2020, he was honored as a member of Crain’s Cleveland Business’ “Forty Under 40” Class of 2020, particularly for his contributions to and vision during the Cavs’ $185 million renovation of Rocket Mortgage FieldHouse. Clouse initially joined the organization as a manager of business development in 2011 and was elevated to director of business development and inside sales in 2013.

Clouse launched his career in sports as a ticket sales associate for Central Florida Athletics (2007-2008), supporting football and basketball endeavors as the program debuted two venues: Bright House Networks Stadium and New UCF Arena. He also held a four-year tenure (2008-2011) as director of ticket sales at Louisville before heading to Cleveland.